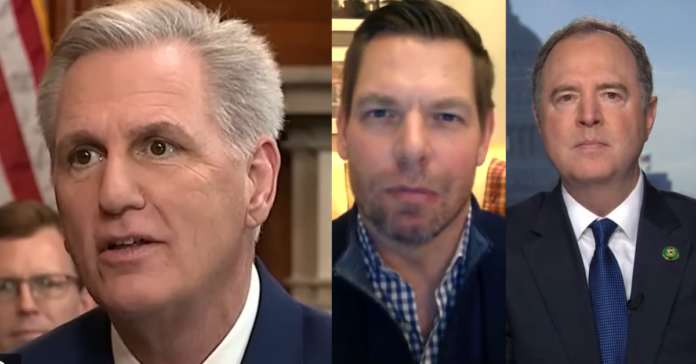 “I appreciate the loyalty you have to your democratic colleagues and I acknowledge your efforts to have two members of Congress reinstated to the House Permanent Select Committee on Intelligence.

“But I cannot put partisan loyalty ahead of national security, and I cannot simply recognize years of service as a sole criteria for membership on this essential committee.

I have rejected the appointments of Adam Schiff and Eric Swalwell for the House Intelligence Committee.

I am committed to returning the @HouseIntel Committee to one of genuine honesty and credibility that regains the trust of the American people. pic.twitter.com/ePxlbanxta

“As such, in order to maintain a standard worthy of this committees responsibilities, I am here by rejecting the appointments of Representative Adam Schiff and Representative Eric Swalwell to serve on the Intelligence Committee.

“It is my assessment that the misuse of this panel during the 116th and 117th Congress severely undermined its primary national security and oversight missions ultimate leaving our nation less safe.

“Therefore, as we enter a new Congress, I am committed to returning the Intelligence Committee to one of genuine honesty and credibility that retains the trust of the American people,” he wrote.

“This is not anything political.

“This is not similar to what the Democrats did.”

Kevin McCarthy just kicked me and @RepSwalwell off the Intelligence Committee.

This is petty, political payback for investigating Donald Trump.

If he thinks this will stop me, he will soon find out just how wrong he is.

I will always defend our democracy.

Someone Call 911, Because Kevin McCarthy Just Annihilated This PBS Reporter