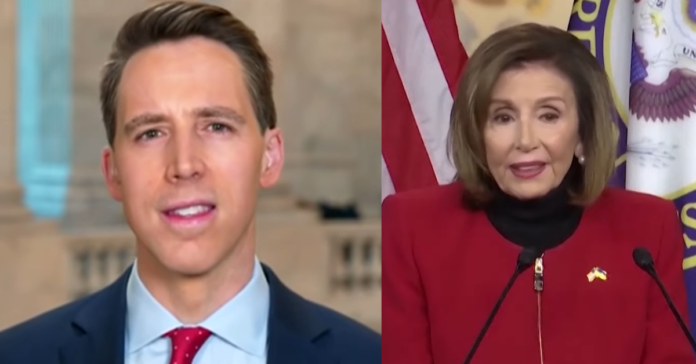 Josh Hawley put former Speaker Nancy Pelosi and every other elected official on notice and introduced the much-needed ‘PELOSI Act’ to ban stock trading by our federal lawmakers.

Hawley said: “For too long, politicians in Washington have taken advantage of the economic system they write the rules for, turning profits for themselves at the expense of the American people.

“As members of Congress, both Senators and Representatives are tasked with providing oversight of the same companies they invest in, yet they continually buy and sell stocks, outperforming the market time and again.

“While Wall Street and Big Tech work hand-in-hand with elected officials to enrich each other, hardworking Americans pay the price. The solution is clear: we must immediately and permanently ban all members of Congress from trading stocks.”

The official name of the bill is the “Preventing Elected Leaders from Owning Securities and Investments Act” or the Pelosi act.

Members of Congress and their spouses shouldn’t be using their position to get rich on the stock market – today l’m introducing legislation to BAN stock trading & ownership by members of Congress. I call it the PELOSI Act pic.twitter.com/aIXNwSnTvW

According to Hawley the bill will:

“Prohibit members of Congress and their spouses from holding, acquiring, or selling stocks or equivalent economic interests during their tenure in elected office. Any holdings in diversified mutual funds, exchange-traded funds, or U.S. Treasury bonds are exempt from the prohibition.

“Give members of Congress and their spouses six months, upon assuming office, to divest any prohibited holdings or place those holdings in a blind trust for the remainder of their tenure in office.

“Ensure members or their spouses forfeit any investment profits to the American people via the U.S. Treasury if they are found to be in violation if the Act. Members who violate the requirements will also lose the ability to deduct the losses of those investments on their income taxes. The ethics committees of Congress may levy additional fines and will publicize violations.

“Require that after two years of the Act’s implementation, the Government Accountability Office (GAO) will conduct an audit of members’ compliance with the Act.

According to CNN, there is a bipartisan push to ban stock trading by elected officials so Hawley’s bill or a similar one has a decent chance of passing:

“A bipartisan duo of House lawmakers reintroduced legislation to ban members of Congress from trading stocks while in office, renewing last year’s push that captured headlines but fell short of a floor vote.

“Democratic Rep. Abigail Spanberger of Virginia and Republican Rep. Chip Roy of Texas reintroduced the TRUST in Congress Act on Thursday. It would require members of Congress, their spouses and their dependent children to put certain investment assets into a qualified blind trust while the member is in office.

“We are long overdue for a vote on legislation to ban Members of Congress and their spouses from trading individual stocks,” Spanberger said in a statement.

“Our TRUST in Congress Act would demonstrate that lawmakers are focused on serving the interests of the American people – not their own stock portfolios,” she added.”

We’ve said it before and we’ll say it again: members of Congress and their spouses need to be banned from trading stocks. https://t.co/luB8aYFI3c

Family Issues Heartbreaking Update On Hollywood Star Missing For 12 Days: "We are all still hoping, but I know he's gone in my mind and because of that I've already said my goodbyes"