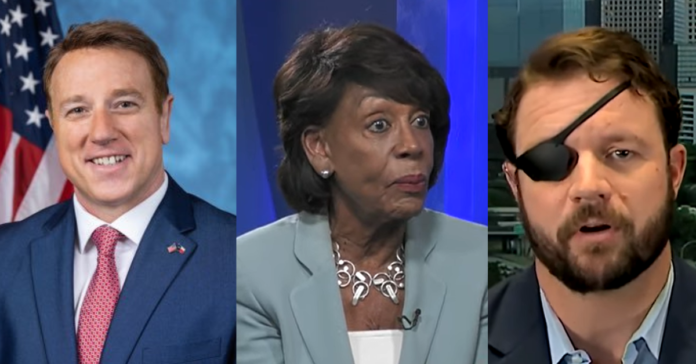 Republican Texas Rep. Pat Fallon introduced legislation Tuesday that would prevent campaign funds from going to a candidate’s immediate family. The bill would hold the candidate directly responsible for knowingly violating the provision.

Fallon cites Dem Rep Maxine Waters as an example of why his bill is needed as she has given her daughter over $1 million in campaign funds over the years. Karen Waters, who has been organizing slate-mailing operations for her mother’s re-election since 2003, and her company, Progressive Connections, have received more than $1 million from the Waters’ campaign over the past decades according to Fox News.

Fallon said: “The Family Integrity to Reform Elections (FIRE) Act is a critical step to reducing nepotistic practices in American campaigns. Allowing direct family members to be on the take of campaigns must come to an end.

“For example, Maxine Waters, the worst perpetrator, has given her daughter over $1.1 million in campaign funds. This is utterly egregious, and I will not stand by as the integrity of our elections is further diminished.”

But Maxine isn’t the only one doing it. According to The Daily Caller:

Democratic Connecticut Rep. Jahana Hayes, who was caught paying her family tens of thousands of dollars since entering Congress after the Daily Caller reviewed FEC records, has continued to pay her children with campaign funds.

…The Caller also first reported in October that Republican Texas Rep. Dan Crenshaw’s campaign has paid a small agency that employs his wife hundreds of thousands of dollars since 2020, according to FEC records reviewed by the Caller.

“However, this loophole has allowed for millions of dollars to flow out campaigns and into the bank accounts of the candidate’s family members with little proof they are contributing.

“This legislation would address this problem by:

“Prohibiting any campaign funds from going to the candidate’s immediate family and holding the candidate directly responsible for knowingly violating this provision.

“Clarifying the definition of immediate family in the Federal Election Campaign Act of 1971.

“Punishing violators with a $100,000 fine or two times the amount paid to the family member — whichever is greater.

“Violators may face up to 2 years in prison in addition to fines,” the release said.

Tomorrow @DanCrenshawTX will be at a “Tea Party” townhall in Montgomery County. The last time he did one he berated a young girl. (Classic!)

If you’re in the area, you should stop by and ask Dan why he pays his wife’s “consulting firm” hundreds of thousands of dollars. pic.twitter.com/kTfgJA3aVt