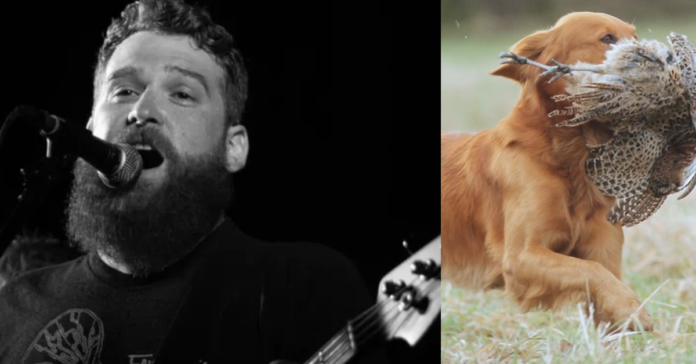 A 32-year-old Wichita, Kansas native was killed in a bizarre and tragic accident when his dog shot him according to the Sumner County Sheriff’s office. The Sheriff’s Office says the man Joseph Austin Smith, 30, was killed after his dog stepped on a rifle causing the firearm to discharge.

The incident happened at around 9:40 a.m. Saturday in the 1600 block of 80th Street near Geuda Springs. The sheriff’s office said the man was in the front passenger seat of his pickup. He had hunting gear and a rifle in the backseat.

“A canine belonging to the owner of the pickup stepped on the rifle causing the weapon to discharge,” the sheriff’s office said. “The fired round struck the passenger who died of his injuries on scene. Responding units arrived within minutes of the 911 call and started CPR.”

The injured man died at the scene.

A fundraiser posted for Smith said:

“My name is Chris, and I am creating this on behalf of the Smith family in order to help with the funeral and memorial costs of our beloved employee, Joe Smith, who unexpectedly was taken from us over the weekend.

“Donations made here will go directly to the family to not only cover funeral costs but any other expenses that arise for the family in the coming months, and allow Joe’s family to grieve without the burden of financial stress.

“Joe is absolutely the most unique individual I have had the pleasure of meeting. He was loved by all of us from all walks of life and loved the same.

“He made us laugh every morning whether it was at him or because of him he always made sure to be a positive light at my company.

“No matter how bad or stressful my or our day was, Joe always had something to lift our spirits. I have been a plumber for a long time and met many many different guys but never have I met another Joe and I am confident there may not be another.

“If you were lucky enough to know, be a friend or family of Joe, you understand what a great loss this is to the world. We must all learn to navigate without him in it.

Please consider donating if you can, as any amount will truly help. We are very grateful for any donation during this very difficult time. If you are not able to donate, it would mean the world to us for you to share this link, someone else may be able to.

“I know it would mean a lot to myself, the rest of our crew, family and friends if you also shared a memory or story of Joe and what he has meant to you.

“We will forever feel so blessed to have him in our lives for just a short time. We will never forget you, Joe.

“A few words from Jessica a beloved friend and coworker,

“Joseph Smith was a truly amazing man. He was kind, funny, smart, and very loving. Every time he walked through the door, he would make someone smile.

“Either from being a goofball or just his natural presence making everything better. It wasn’t hard to love Joe because he always made you feel like you were one of a kind and never left a conversation without letting you know he loved you.

“Joe is going to be dearly missed by so many. He was a great friend, employee, cousin, brother, son, and dog owner. We have loved and lost one of the best. Rest in Peace Joseph,” the fundraiser said.

Investigators say a dog belonging to the truck’s owner stepped on the rifle, causing it to discharge. Smith was hit in the back.

Responding units arrived within minutes and tried to revive him, but he died at the scene.

The sheriff’s office did not release whether anyone else was in the truck or if the truck was moving at the time.

Officials in Kansas say a man has died after he was shot by his dog. https://t.co/XqC02faQkN

Joe and Kamala Getting Boxed Out of WH For Newsom...And They Can't Stop it...

After Avoiding Criminal Charges For Violating US Constitution, Adam Schiff Whines About Being Kicked Off Intel Committee