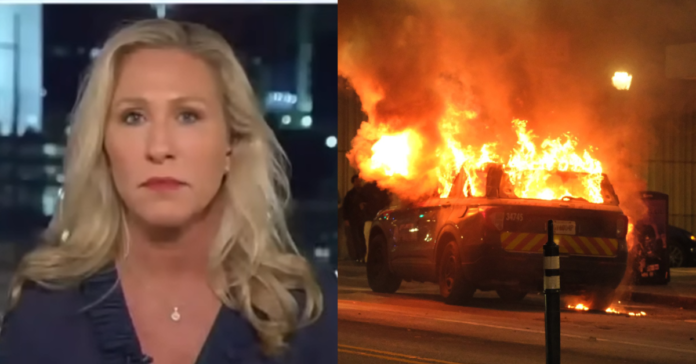 Georgia Rep. Marjorie Taylor Greene reached her limit after the riot in Atlanta. She went on Tucker Carlson’s show last night to announce that she will be introducing a bill in Congress to declare Antifa a terrorist organization.

She said: “I think, honestly, America is sick and tired of Antifa. Antifa is the ground troops of the Democrat party. They never get prosecuted. That’s because, well we know the truth, it’s the Democrats in control.

“Well, it’s time to do something about Antifa. That’s why I’m going to introduce legislation to declare Antifa domestic terrorists. Because they need to be taken apart. We need to investigate exactly who they are, who funds them.”

Greene noted that because of their scandalous behavior, members of the group are not actually “anti-fascists” as they claim but are the real “fascists.”

Tonight on Tucker Carlson, I announced I will introduce legislation to do just that. pic.twitter.com/rbMnGkwJml

“Law enforcement demonstrated how quickly we shut down those trying to import violence from other states, and we’ll continue to do so.”

After Atlanta police arrested some rioters America was stunned to learn they were mostly rich, bored spoiled kids of immense privilege.

“Two of the six suspects arrested during a riot in downtown Atlanta Saturday evening have been granted bond Monday morning.

“A Fulton County Court judge granted both 23-year-old Ivan Ferguson of Nevada and 20-year-old Graham Evatt of Decatur, Georgia bond of over $355,000.

“Francis Carroll is the son of a yacht-sailing, multi-millionaire family.

“Carroll was already out on bail for a domestic terrorism arrest at the Atlanta autonomous zone last month. He is the son of a yacht-sailing, multi-millionaire family and hails from the wealthy Maine city of Kennebunkport, also home to former president George W. Bush.

“Carroll, who lived in his parent’s mansion before going to Atlanta, was among six people arrested and charged with domestic terrorism, aggravated assault and other crimes on Dec. 13 following a string of property attacks around the area, a carjacking and assaults on officers.

“They were all bailed out by activists who crowdfunded their legal defense using Twitter.”

Law enforcement demonstrated how quickly we shut down those trying to import violence from other states, and we’ll continue to do so. https://t.co/ZZwmOUbFRw