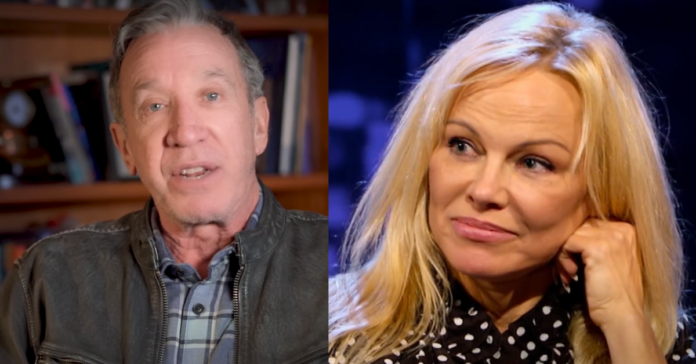 Pamela Anderson has a memoir, “Love, Pamela,” coming out soon where she claims Tim Allen flashed her on the set of “Home Improvement” in 1991 when she was 23 years old.

Allen was 37 at the time of the alleged incident. Anderson’s big break was as a model for Playboy. Anderson played Lisa the Tool Girl for two seasons of Allen’s hit show which was the No. 1 TV series in the United States for a while.

She left Home Improvement to star “Baywatch” and the rest is history. She said of the man who changed her life: “On the first day of filming, I walked out of my dressing room, and Tim was in the hallway in his robe.

“He opened his robe and flashed me quickly, completely naked underneath.

Pamela Anderson has given thousands of interviews. Never mentioned Tim Allen doing anything to her. But now she needs to sell a book, and he has a ton more relevancy than her. She will do anything for attention, including creating a story.

“He said it was only fair because he had seen me naked. Now we’re even.

Tim Allen fired back telling Variety that the incident never happened and that he would never do something like that.

“No, it never happened. I would never do such a thing.”

According to USA Today:

Anderson’s allegation previews the unflinching honesty of “Love, Pamela,” a memoir that will see the “Baywatch” bombshell and Playboy cover girl cast aside the glamorous façade to tell her life story, interspersed with original poetry.

I had this symbol on everything as a kid and young fan of the military. Yes, I know its Air Force. I was amazed at all the branches. Especially tanks & subs. Today we honor all the brave patriots who sacrifice for this country. I am grateful and salute you all. Go Vets! pic.twitter.com/XlpM9AmMPL

Lori Lightfoot Blames Chicago Crime On Jussie Smollett Prosecutor: “They are handing out certificates of innocence like they’re candy”