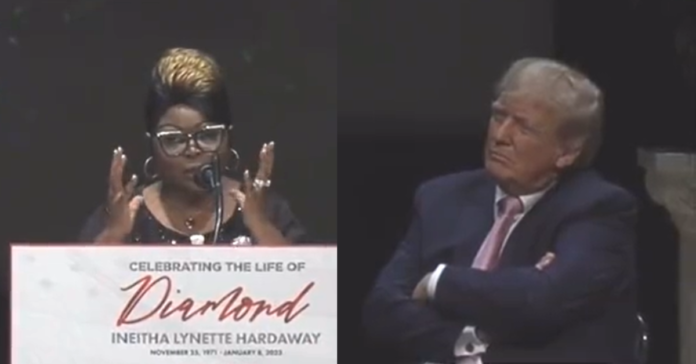 Lynette “Diamond” Hardaway of the pro-Trump duo “Diamond and Silk” passed away earlier this month at her North Carolina home at the age of 51. She will be missed.

Her sister Rochelle “Silk” Richardson revealed during a celebration of life ceremony for Diamond the generous thing former President Donald Trump did for the family when they needed it most and without any fanfare.

Richardson revealed that Trump covered all the costs of the ceremony. She said: “I got to tell this. And I pray and hope that it is OK with President Trump because, he does things and it don’t get out in public, and now that I have the world’s attention, I have to say this.

“When I told him that Diamond had passed, he said, ‘ohhh,’ he was heartbroken.

Silk talks about how DJT told her to have whatever she wants for Diamonds funeral and he would cover the costs. I love this man 🥰 pic.twitter.com/wjkeno8GWZ

“He said, ‘OK, we’re going to have a nice gathering for her, a nice funeral,’ and I said oh no we don’t have a body.

“We followed her wishes and we cremated her.

“That’s what this man did for my sister!

“He didn’t waver. He didn’t think about it.

“This is what a president is supposed to do.

“I don’t care what people say about Trump.

“His decency is never reported and his bad behavior is always exaggerated.”

“Juxtapose this with Biden checking his watch while the caskets of 13 brave service members were being deplaned.”

That’s a good man. I don’t care what people say about Trump.His decency is never reported and his bad behavior is always exaggerated.