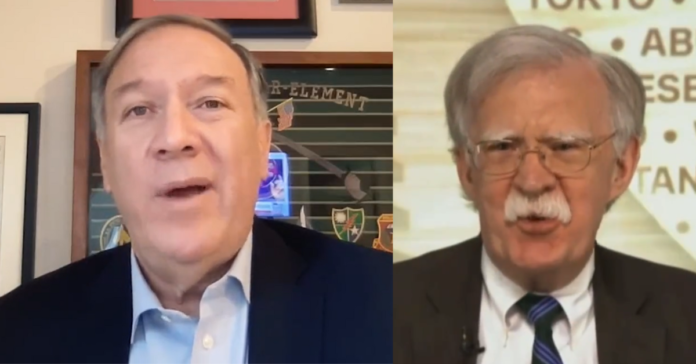 Former secretary of state Mike Pompeo has a new book, Never Give an Inch: Fighting for the America Love, which will hit the shelves next week. In it, Mike takes a swipe at Nikki Haley, Jared Kushner, and Trump’s former National Security Adviser John Bolton.

Pompeo accuses Haley of plotting with Jared Kushner and Ivanka Trump to get rid of Mike Pence and get herself named vice-president. Pompeo claims Haley “played” Trump’s then-chief of staff John Kelly.

“As best Kelly could tell,” Pompeo writes, “they were presenting a possible ‘Haley for vice-president’ option. I can’t confirm this, but Kelly was certain he had been played, and he was not happy about it. Clearly, this visit did not reflect a team effort but undermined our work for America.”

But he saves his harshest criticism for Bolton who he said belongs in jail.

Bolton, Pompeo said, should “be in jail for spilling classified information.”

Pompeo also said he hopes to testify against Bolton if John ever faces criminal charges.

Bolton fired back during a CNN interview:

“What he knows, in fact — or should know — is that my book went through a four-month-long pre-publication review process precisely to make sure there was no classified information in the book.

“It was arduous at times I can tell you.

“The National Security Council senior director responsible for that review cleared the book.

“And inside the White House, because Donald Trump didn’t want the book published before the election, he fired the senior director, a career employee of the National Archives, from her job and tried to get another review going.

“If he didn’t know about it, it’s incompetence in writing the book for not checking out the facts before he put it down on paper.

“And if he did know about it, that’s malicious and well beyond reckless to say things like that,” Bolton said.

“John (Brennan) along with Director Comey over at the FBI were a pair of truly bad actors.” — Former FBI Director and Secretary of State @mikepompeo

After Mike Pompeo said John Bolton should be in jail for putting classified info in his book, Bolton fires back, saying that Trump fired a career employee at Nat Archives who approved it had people in govt illegally trying to keep it from coming out before the election. pic.twitter.com/aC4My6UxvK

Everytime I see John Bolton lecturing us on democracy, elections, NATO membership this video comes to my mind where he bragged about his role in military coups around the world. Some folks have no shame at all. pic.twitter.com/xCHEBRMJOj