Lori Lightfoot Blames Chicago Crime On Jussie Smollett Prosecutor: “They are handing out certificates of innocence like they’re candy” 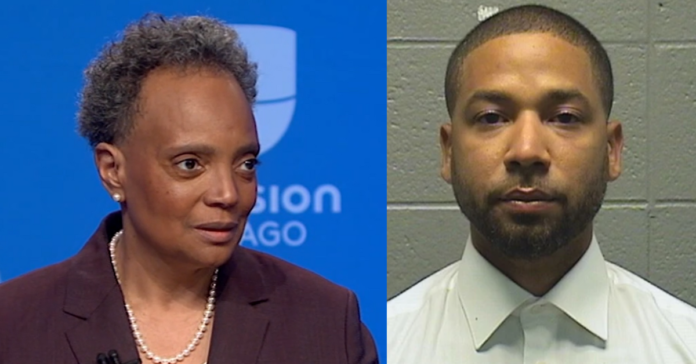 Semafor reporter David Weigel is covering the race for Chicago’s Mayor where incumbent Lori Lightfoot currently finds herself in third place in the polls. The election is at the end of February and if no candidate gets 50% of the vote, the top two will face off in a runoff election will be held on April 4, 2023.

Crime is the number one issue facing the city and all agree Lightfoot has made it worse by going after the police department.

So what does the failing mayor do? She passed the buck and blamed the infamous prosecutor who let Jussie Smollett off. Smollett made a sweetheart deal with Kim Foxx that outraged the city. A special prosecutor was appointed to investigate and they concluded Jussie should face charges.

Smollett was convicted and hauled off to jail only to be released a day or so later as he appealed his guilty verdict.

Weigel said: “Lightfoot on Cook County state’s attorney Kim Foxx and her team: “They are handing out certificates of innocence like they’re candy.”

That may have worked in years past but Lightfoot gave up the game in a recent debate where she told crime victims not to use cash rather than crack down on the criminals.

Lightfoot was talking about the street vendors in the Hispanic neighborhood of Little Village who have become targets for armed robberies.

Lightfoot on Cook County state’s attorney Kim Foxx and her team: “They are handing out certificates of innocence like they’re candy.”

Instead of saying she would put more cops on the streets or create a special detail so these workers can feel safe doing their job, she said told them not to take cash money if at all possible. The worst Mayor in America just proved it again. She said:

“We have been in Little Village working with street vendors, understanding what the nature of the crime is, making sure we’re doing things in concert with them to help them make sure that their money is secure, not use money (cash) if at all possible, use other forms of transactions to take care of themselves.”

“It’s not really surprising the mayor’s counsel was for tamale vendors to not take cash, the city police social accounts offer advice to residents on avoiding being victimized. It’s city policy at this point to push that responsibility out to residents.

“I get the need to be pragmatic and realistic, I get that you gotta look out for number one and all that. But I think it reflects an acceptance of violence and disorder when the official line, from the agency tasked in part with public safety, is “don’t get got.”

“I think in a more functioning city, the police department wouldn’t tell people to take safety in their own hands and to buy gear for their cars to prevent theft or make recovery easier, and the mayor wouldn’t tell vendors to avoid cash transactions.

“I know it’s a reflection of the world we have, the rules in the city as they exist now. I’ve always had an appreciation for the need to adjust behavior to those realities. That’s just living in the city. I get that.

“But my behavior and my response as a resident should, I think, be different than the city gov’t’s. I don’t understand how gov’t isn’t, in this case, somewhat idealistic and aspirational. Let’s stop robberies, because they’re bad and harm people. It’s a simple policy goal I think.

“I don’t think that’s at odds with being realistic – of course there are things you can do to avoid being victimized. But people already know that. Nobody needs to be told, be careful.

“People already are careful. And, related: this isn’t a high risk behavior / high risk of victimization situation. This is the city telling its residents to not go out and make a lawful living the way they know how because, result of ~gestures broadly~ there are robberies.

“So what’s the pragmatic solution here – just don’t sell tamales if selling tamales is how you earn a living? Don’t drive in the city? Don’t buy a Kia? Don’t take the CTA? Yea, that’s it. Don’t get got. But is that what you want from your city government?

“Just boggles my mind, on something so simple, city can’t say “robbery is wrong, we have Ds working patterns, the district commander knows it’s a problem and has tac cars working early” or whatever. (Of course,  would have to be true for that to even be a thought one entertains.)

“And if you’ve had a gun stuck in your face, for the $200 you made from getting out the door at 330a to sell tamales to people on their way to work … is that what you want to hear? Don’t take cash? What message does that send to every other business, or every other victim?

“OK last thing. Tamale vendors on 18th and 26th streets, east side etc … more important to city culture and identity than the Bears at the lakefront IMO. A lot more. Maybe not in tax $$$. But it’s one of the things that makes Chicago feel like home for people. It’s the city.”

“Make sure that their money is secure, not use [cash] if at all possible, use other forms of transactions to take care of themselves.”pic.twitter.com/UkTw6JFMZu

It’s not really surprising the mayor’s counsel was for tamale vendors to not take cash, the city police social accounts offer advice to residents on avoiding being victimized. It’s city policy at this point to push that responsibility out to residents.