Mayoral Candidate Overrules Lightfoot: ”I will take the handcuffs off police and put them on criminals, police should be able to chase them down and hunt them down like a rabbit” 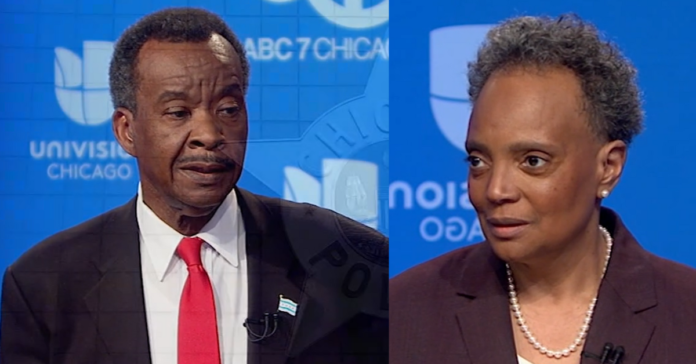 Chicago Mayor Lori Lightfoot is trailing the polls for good reason, she destroyed a great American city in less than four years. She needed a strong performance in the recent debate to have any hope for re-election and she came up short.

One candidate to replace her, Willie Wilson, overruled the failing mayor on the issue of crime in a telling exchange. Wilson said during the debate that if he is elected mayor he will make one move sure to reduce crime in the city. He said he would remove the handcuffs Lightfoot put on police officers so they can chase and catch criminals who are fleeing to avoid arrest.

He said: “It is unconscionable that there are rules in place that prohibit police from chasing down criminals. As mayor, I will take the handcuffs off our police and put them on criminals.

“Somebody run, chase somebody by foot or car, that police officer should be able to chase them down, and hunt them down like a rabbit, okay.”

The entire city, save the criminals and Lightfoot, applauded the statement. She said:

“For a candidate for mayor to say that we ought to take the handcuffs off police and let them hunt down human beings like rabbits is an extraordinary thing.

“I fully and utterly condemn it.”

Wilson, speaking for the fed up city residents, fired back:

“So I think the mayor done lost her mind.

“I think she’s out of touch.

“You know, if she wasn’t out of touch she would know she has to protect the people at all costs.”

Lightfoot, who has watched the city turn into the wild west, said with a straight face:

“What I’m focused on is making sure our city is safe.

“That’s the most important thing. For me that’s now about politics, it’s about basic obligations about me as a mayor and our administration to focus on making sure that our communities are safe.”

My 20-year-old son was murdered. I understand the pain of families that have lost loved ones. It is unconscionable that there are rules in place that prohibit police from chasing down criminals! As mayor, I will take the handcuffs off our police and put them on criminals.

I will allow our police to do whatever it takes within the law to make our streets safe and solve crimes.