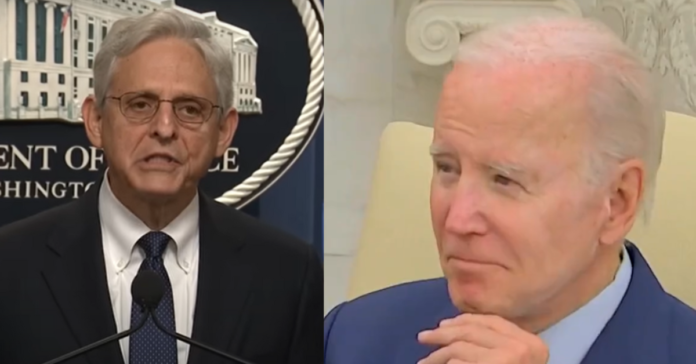 Officials from the Department of Justice searched President Joe Biden’s Wilmington, Delaware home for more than 12 hours and found six new classified documents dealing a huge blow to Biden and the Democrats.

“DOJ also took for further review personally handwritten notes from the vice-presidential years. DOJ requested that the search not be made public in advance, in accordance with its standard procedures, and we agreed to cooperate.

Biden said earlier about the scandal:

“I have no regrets.

“I’m following what the lawyers have told me they want me to do. It’s exactly what we’re doing. There’s no ‘there’ there.

“We found a handful of documents that were filed in the wrong place.

“We immediately turned them over to the National Archives and the Justice Department.

Representatives of Biden’s personal legal team and the White House Counsel’s office were there.

Neither Biden nor the First Lady were in Wilmington during the search.

They travel home to Wilmington on most weekends, as Biden has done throughout his time in public office.

When Biden opted to instead go to his beach house in mid-January, it raised questions whether the Rehoboth Beach visit was in any way tied to the ongoing document investigation.

BREAKING: Feds searched Biden’s home in Wilmington yesterday for nearly 12 hours and they found “six items consisting of documents with classification markings and surrounding materials, some of which were from the President’s service in the Senate” pic.twitter.com/bizExMsxPJ

With the latest discovery, there is no real question that the Biden documents were grossly mishandled. There only remains who was responsible. However, the discovery of documents at yet another location used by the President is crushing for his defense team.

…This now has to be not only “inadvertent” but almost miraculous that the documents seem to follow the President without any knowledge or purpose for their use. For unknown and unrequested documents, they seem to track the President wherever he goes.

Mayoral Candidate Overrules Lightfoot: ”I will take the handcuffs off police and put them on criminals, police should be able to chase them down and hunt them down like a rabbit”