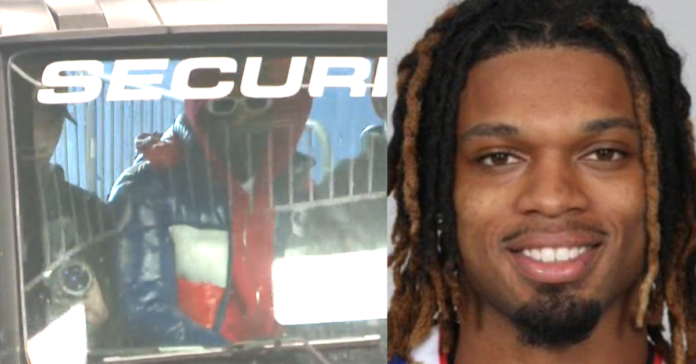 Buffalo Bills star safety Damar Hamlin gave his teammates a huge boost before the playoff game against the Cincinnati Bengals by making a glorious return to Highmark Stadium for the game. Last week he watched the team’s playoff game from home.

Today, despite still recovering from injuries that saw him get CPR for nine minutes, he made his way to the stadium to support his teammates.  Tracy Wolfson of CBS said Hamlin was in the Bills’ locker room with the team before the game. He arrived in a security cart about 90 minutes before game time.

The fans are sure to give Hamlin a huge welcome the team will feed off. The entire Buffalo Bills roster will be wearing No. 3 pendants to honor Hamlin. Damar made his first visit to the team’s facilities on Jan. 14, a day before the Bills’ playoff game against the Dolphins. This is the first time the fans will see him in person.

Hamlin was released from the hospital in Cincinnati on Jan. 9. He was moved to a Buffalo hospital where he stayed an additional two days.

In the video below you can see that Damar moves as if he is recovered but Hamlin’s longtime friend and business partner, Jordon Rooney, said he has a long way to go.

He said: “Despite being out of the hospital, Damar still has a lengthy recovery. Damar still requires oxygen and is having his heart monitored regularly.

“He has visited with the team a few times but he still gets winded very easily. He’s upbeat and positive and ready to continue to overcome this.”

Bills coach Sean McDermott said Hamlin has been visiting with the team at Buffalo’s facilities “almost daily” but has been severely limited.

“It’s limited, just overall. But he comes in and really just started really today or yesterday and just trying to get back to a little bit of a routine and just get himself acclimated again and taking it one step, one baby step at a time here.”

He said Hamlin has not been participating in team meetings but is “dipping his toe back in here and, you know, getting on the road to just getting back to himself.”

Bengals receiver Tee Higgins, who was on the other end of the hit that sent Damar to the ground said he hopes to see Hamlin this weekend when the Bengals play the Bills for Sunday’s AFC divisional round game.

“I’m pretty sure we’re just going to chop it up, laughs and giggles and just be happy to see him,” Higgins said.

Damar Hamlin is in the stadium for Bills-Bengals 👀

From IG stories of Dion Dawkins and Von Miller. The whole #Bills roster is getting “3’d up” for Damar Hamlin ahead of Sunday’s game vs. the Bengals. pic.twitter.com/Tr0PEHw5uq

Joe Biden Had Better Start Worrying About His Dem Friends