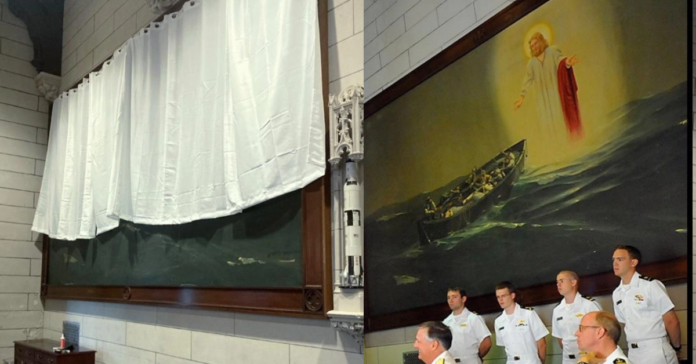 A painting of Jesus with his arms outstretched over a lifeboat packed with sailors lost at sea on display in the US Merchant Marine Academy in New York has been covered by a curtain after numerous complaints.

Michael Weinstein, Founder and President of the Military Religious Freedom Foundation (MRFF) wrote a letter to Vice Admiral Nunan asking him to remove the painting. He wrote:

“I come to you this day to demand that the USMMA, which you currently command as its Superintendent, expeditiously remove a massive, sectarian painting illustrating the supremacy of Jesus Christ from the so-called “Elliot M. See Room” located inside of Wiley Hall, which serves as an administrative building at USMMA.

“Admiral Nunan, I don’t want to belabor the brutally obvious point that this extremely large painting of Jesus is absolutely antithetical and destructive, as it is currently displayed, to the maintenance of good order, morale, discipline, and unit cohesion at USMMA, especially to non-Christians under your command.

“The outrageousness of that Jesus painting’s display is only further exacerbated by the fact that this room is also used regularly for USMMA Honor Code violation boards where midshipmen are literally fighting for their careers.”

Nunan responded to the letter saying the painting is too big to move but that it would be covered.

“I have asked my staff to purchase a curtain to be placed in front of the painting.

“This will completely block the painting from view, but also allow those who wish to view it the opportunity to do so.

“Second, I have asked the Director of the American Merchant Marine Museum to prepare a plaque that explains the history of the painting, which will be installed near it.

“Given the size of the painting, there is no other location to which it can be moved.”

“We think this is a superb solution,” Weinstein said.

“It will be a teachable moment every time somebody asks why those curtains are up there,” he said.

Joe Biden’s Chief Of Staff To Resign, Susan Rice May Replace Him According To New York Times