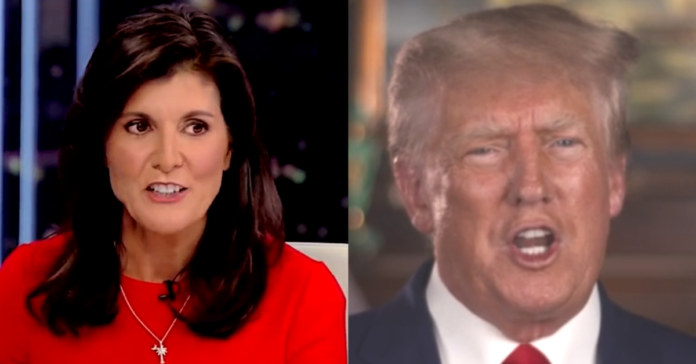 Former South Carolina governor Nikki Haley took a veiled swipe at her old boss former President Donald Trump on Fox News last night. Haley was on Sean Hannity’s program where she dropped hints she will run for president before taking a swipe at Trump.

Haley fired back at the View co-host Ana Navarro who said on CNN recently that Haley “stands for whatever is convenient at the moment.”

Haley said: “She’s been, first of all, anti-Trump forever. They can’t stand the fact a minority female would be conservative They want me to hate Trump all the time. And the fact that I don’t, they find that highly offensive.”

Hannity asked whether Haley will run for president and Haley would not answer but she did take the opportunity to take a veiled swipe at Trump.

America is worth the fight—and we’re just getting started. pic.twitter.com/L93Q6WirzD

“We cannot have another term of Joe Biden.

“And we have to remember, too, we have lost the last seven out of eight popular votes for president.

“It is time that we get a Republican in there that can lead and that win a general election.

Nikki Haley is asked tonight if she is running for president: “Am I that person that can be that new leader? That yes, we need to go in a new direction. Can I be that leader? Yes, I think I can be that leader.” pic.twitter.com/wN9JL0QTNm

PA Woman Charged With Murdering Her Parents, Hacking Them With a Chainsaw, And Tossing Them in The Garbage