Matt Gaetz Says Biden Doc Scandal Is Inside Job And Dems Want Him Gone: “Maybe a lot of these Democrats have figured out they’d rather roll with Gavin Newsom” 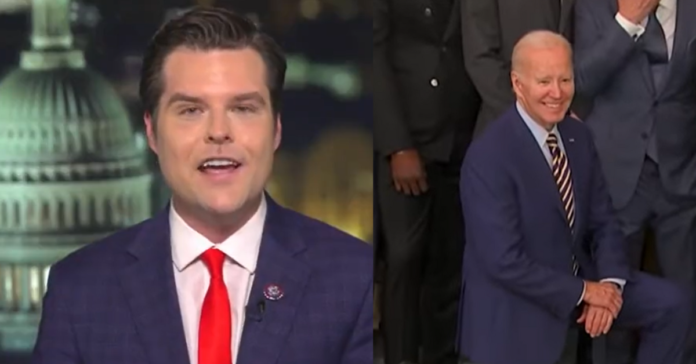 GOP Rep Matt Gaetz gave President Joe Biden some horrifying news claiming the document scandal that rocked his administration in an inside job and that the Democrats want him gone. Matt said:

“Well, things in Washington aren’t always what they seem. Consider this. It was Joe Biden’s Democrat personal lawyer that was rummaging around his stuff, looking for what? Evidence of a crime that his septuagenarian client committed nine years ago?

“And then he alerts the democratic staff at the White House that does the absolute worst thing you could possibly do; they sat on the information. They should have diffused the matter and then inoculated themselves in the process.

“Then the moment this is leaked to CBS, you have the Democrat Biden Department of Justice appoint a Special Counsel.

Matt Gaetz: Joe Biden is mad his own DOJ is investigating him. pic.twitter.com/An6tP6Jgkw

“And now the big tell is that even Joe Biden’s strongest allies in the congress, like Senator Coons, are saying that they approve of the appointment of a special counsel to criminally investigate the president.

“Maybe the Deep State and a lot these Democrats have figured out that they’d rather roll with Gavin Newsom than Joe Biden.

“The Republicans might not even have to help the Democrats take out their trash.”

“I have no regrets. I’m following what the lawyers have told me they want me to do. It’s exactly what we’re doing. There’s no ‘there’ there.

“We found a handful of documents that were filed in the wrong place. We immediately turned them over to the National Archives and the Justice Department.

They want Kamala-Lala-Ding-Dong? Lord, help us.

Movie Star Says Hollywood Is More Racist Than Alabama: “I’m going to be honest, I felt more racism when I first moved here than I ever had in Alabama”