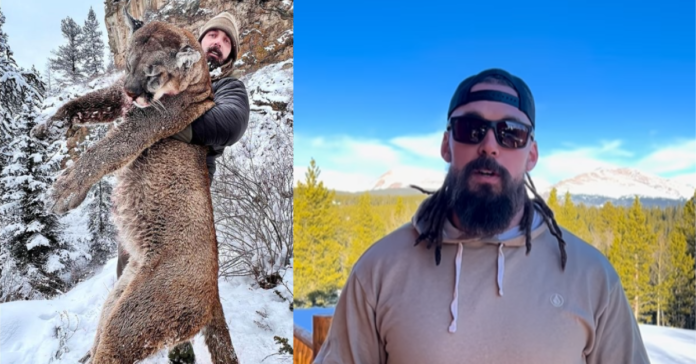 Super Bowl champion Derek Wolfe took to Instagram to tell his fans how he hunted and killed a massive mountain lion using a bow and arrow after it terrorized a rural Colorado neighborhood. The former Denver Broncos defensive end said he had been asked to hunt the animal after it ‘wreaked havoc’ killing two dogs and a mule deer.

Wolfe said: *Predator Control* Late Tuesday night I got a call from @huntnest to see if I wanted to stalk a giant Tom (male mountain lion) who has been wreaking havoc in a rural neighborhood. He had already killed two of her dogs and was living under her porch, nervous what he might do next.

“Then I had to crawl backwards down the mountain with him to get him to the truck I fell 10ft off a rock face on the way down lol. Any guess how big this thing was?”

But not everyone was happy. According to The Daily Mail:

Some social media users were not impressed with the catch, slamming him for the hunt.

‘Too bad the endangerment laws are not fully enforced in CO. And oh – keep your friggin dogs indoors at night.’

‘Grant is not a city. When you live in rural Colorado you sign up for living WITH wildlife,’ another claimed.

‘There are guidelines for NOT making your dogs a food source. Go back to Kentucky.’

One blasted Wolfe for posing with his kill, writing: ‘If it had to be done, I understand. No reason to pose with the corpse though.’

Another added that he should be ashamed. saying: ‘Mountain lions don’t terrorize. They survive. Humans, like one of the most disappointing high draft choices of the Broncos terrorize. Shame on you for celebrating this.’

Others disagreed with Wolfe’s claims the mountain lion had been ‘terrorizing’ the neighborhood as one user branded it ‘ridiculous’.

They posted: ‘Terrorizing???? Or maybe because y’all encroached on it’s home and it was hungry!! Naw this ain’t it!! Smdh!! There aren’t enough to go around and they don’t repopulate like deer etc.. sooo try again.. THIS IS NOT A WIN MY FRIEND!! This is just ridiculous!!!’

Lauren Boebert Issues Warning To Joe Biden: “Let it be known, the Oversight Committee will be looking into Biden’s attempts to hide his scandal, sunlight is the best disinfectant”

Matt Gaetz Says Biden Doc Scandal Is Inside Job And Dems Want Him Gone: “Maybe a lot of these Democrats have figured out they’d rather roll with Gavin Newsom”