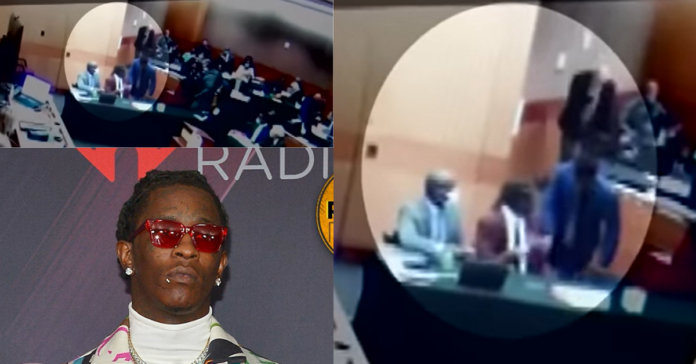 Rapper Young Thug and one of his codefendants were busted doing a “hand-to-hand” drug deal inside a Georgia courtroom on Wednesday according to a motion filed by the Fulton County District Attorney’s office on Thursday.

A video which you can see below shows codefendant Kahlieff Adams handing the rapper, whose name is Jeffrey Williams, a Percocet pill as he sat near his attorney. The rapper was charged with eight counts of violating Georgia’s Racketeering and Corrupt Organizations Act for allegedly leading a street gang called Young Slime Life, or YSL.

Williams and 13 others face trial in Atlanta. They were in court for jury selection. A deputy spotted the transaction and confiscated what was later determined to be a Percocet pill.

Adams was later brought to a Grady Memorial Hospital because it was believed he ingested contraband in an apparent attempt to “conceal further crimes,” the motion states.

Young Thug is being held without bond. Keith Adams, one of Williams’ attorneys, said the rapper had nothing to do with the transaction.

“His side is the truth.

“The reality is Mr. Williams had nothing to do with what went on in the courtroom on yesterday.

“One of the co-defendants on his way to the restroom attempted to pass something to Mr. Williams, who immediately turned it over to the deputy.”

Adams said Williams did not know it was a Percocet being handed to him.

INVESTIGATORS: Adams was taken to Grady Hospital after he appeared to ingest other items of contraband in an effort to conceal the extent of his crimes within the courtroom.

When deputies searched Adams, they found him in possession of Percocet, marijuana and tobacco wrapped in plastic and food seasonings to conceal the odor of weed, according to investigators.

Dolly Parton’s Dream About God Inspired New Song She Released On 77th Birthday: “I had a dream about God standing on a mountain, looking down on us”