Al Sharpton Compares Trump To Muhammad Ali: “We should never underestimate someone like Trump” 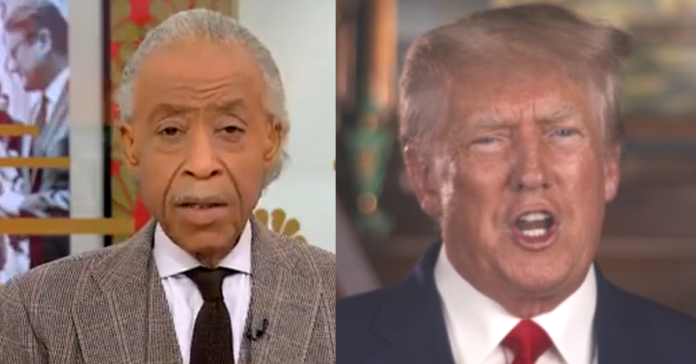 Al Sharpton went on MSNBC and compared former President Donald Trump to Muhammad Ali warning the Democrats not to underestimate Trump as he begins his campaign for the presidency. Joe Scarborough said:

“And it’s kind of like, you know, Ali in 1977, Ali was slowing down, great boxers like Jimmy Young would push him to the edge, but he was still the champ and still figured out how to win fights.

“Forgive me, I’m not comparing Donald Trump in any way to Muhammad Ali, but I am saying he’s still the champ in the GOP.

Rev. Al Sharpton: “Muhammad Ali…toward the end of his career…knew how to do just enough to win…He used theatrics…There’s no one better in the Republican political realm that understands theatrics better than Donald Trump.” pic.twitter.com/IvS1r4SQu6

“He’s still the most popular member of the party.

“He’s still the guy that can dominate the stage like nobody else there.

“I think we the media keep making the mistake of thinking ‘oh he can’t win the Republican nomination this year, can he?’”

“As you and I were talking, Muhammad Ali, who I got to know pretty well toward the end of his career, he knew how to do just enough to win rounds when he couldn’t necessarily knock somebody out. And he used theatrics.

“There’s no one better in the Republican political realm that understands theatrics better than Donald Trump.

“That should not be underestimated.”

“We’ve seen DeSantis throwing a lot of punches in Florida.

“When he gets on that big stage, particularly against Donald Trump, let’s see if he can take a real punch.”

On this Friday January 13th, ‘LoudMouth: the life and battles of Al Sharpton’ will be released on @PrimeVideo and @AppleTV! Join us in support and host a watch party for our national 2023 Loudmouth kickoff.#LoudMouthTheFilm#LoudMouthNation

Could This Newly Uncovered Explosive Email Be The Smoking Gun Against Joe?