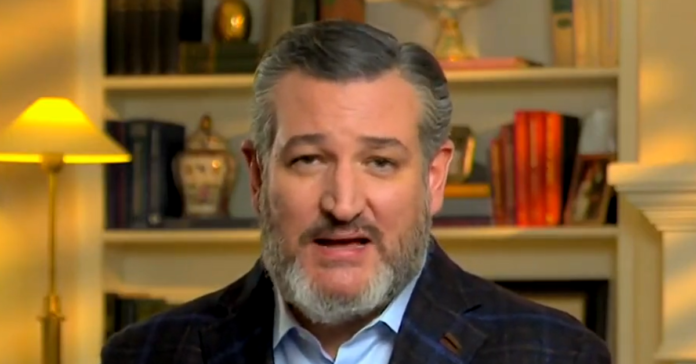 GOP Senator Ted Cruz dropped the hammer on President Joe Biden saying this past week has been the worst week for Biden since the debacle in Kabul. Cruz also said the Department of Justice cannot indict Trump over classified documents now. Ted said on Fox News:

“This past week has been the worst week for the Biden White House since the disastrous withdrawal from Afghanistan. Since the murder of 13 servicemen and women. The White House hasn’t had as bad a week as they have had.

“He was blinking out SOS because he was so unhappy. He was forced to do it. He had no choice but to appoint a special counsel given the utter hypocrisy that he was going after Trump.

“It was discovered that Biden had classified documents not in one place, not in two places, not in three places…

“And with all of his preening about irresponsibility, he is either being dishonest or incompetent.

“But what is clear is that he is sending Karine Jean-Pierre out there to dissemble, to mislead, to say things that are factually false.

“Day after day she stands up and says falsehoods from that podium and I think it’s only going to get worse.

“Because this administration is corrupt and it’s dishonest.

“The Department of Justice knew about it.

“We’ve learned that the Biden Department of Justice leaks like a sieve when it’s against Donald Trump.

“And yet in this instance, six days before the election, miraculously DOJ was slammed tight like a trap.

“They were not going to leak it because they want Democrats to win.

“Because it is a patently double standard.

“I think that they believe that the special counsel is going to give them a slap on the wrist, put it under the rug, and be done with it.

“They’re not really worried about facing an indictment.

“Here is what they are worried about. Merrick Garland and the Biden White House wanted to indict Donald J. Trump.

“They wanted to indict him for Mar-a-Lago and suddenly they are in a world of hurt politically because if they bring that indictment, even someone who’s been asleep under a log for 100 years will wake up and say ‘well wait for a second, why did you indict that guy for something the other guy did.’”

Merrick Garland had no choice but to appoint a special counsel once it was discovered Joe Biden had classified docs at the Penn Biden Center, in his garage next to his Corvette, and in his house.