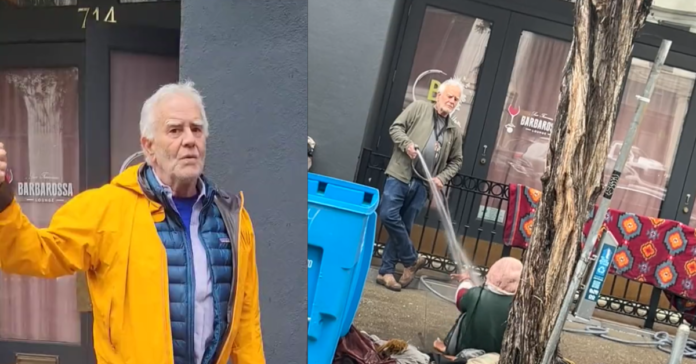 A San Francisco gallery owner who was filmed spraying down a homeless woman with a hose has been arrested for battery. San Francisco doesn’t arrest criminals, drug users, or the homeless but a man who reached his limit with cleaning up the politician’s mess will go to jail?

Collier Gwin, the owner of Foster Gwin art gallery, is being held on a misdemeanor charge police said Wednesday following his arrest. If convicted, Gwin could face up to six months in county jail and be hit with a $2,000 fine.

“The alleged battery of an unhoused member of our community is completely unacceptable,” San Francisco DA Brooke Jenkins said. “Mr. Gwin will face appropriate consequences for his actions.”

“The vandalism at Foster Gwin gallery is also completely unacceptable and must stop,” Jenkins admitted  before saying “Two wrongs don’t make a right.”

“You know, spraying her’s not the solution, but spraying her was something that woke her up, and that calmed her down,” Gwin said.

“So am I sorry? I’m only sorry that my way of helping her countlessly has gotten nothing done.”

“I said she needs psychiatric help. You can tell, she’s pulling her hair, she’s screaming, she’s talking in tongues, you can’t understand anything she says, she’s throwing food everywhere. I’ve been down here 40 years.

I just went down and confronted him during an interview with the chronicle pic.twitter.com/BMuQMJaoHl

“I’ve seen tons of homeless people, we’ve helped the ones that we could, and I have not had any issues with people. But in this case, I was very upset, that the city could not help, and their hands are tied too.

“I’m out there once again cleaning her mess. Washing it down, trying to clean up stuff, and I just snapped.

“I was watering around her, and I just snapped, when she off in her belligerent, tongues and stuff.

“And I just snapped and I pulled the hose up higher, and I sprayed her.

“When I look at myself on the film, I can’t even believe that that’s me. But, I didn’t know what else to do. It was getting so frustrating

“I feel awful, not just because I want to get out of trouble, or something like that, but because I’d put a tremendous amount of effort into helping this woman on the street. I’m very, very sorry, I’m not going to defend myself, I’m not going to, because I can’t defend that.”

Barbarossa Lounge, whose business could be seen in the background of the video, said:

“Barbarossa Lounge has been made aware of a video that has begun to circulate on social media, which was filmed outside of our small business. Barbarossa is in no way associated with the inhumane actions portrayed in the video.

“Upon investigation it appears the actions are those of a neighboring business owner.We are extremely disappointed in this individual’s behavior and in no way support such actions.

“We have been informed that further formal and media investigation is underway. Barbarossa strives to support our local community and treat all passerby and patrons with equal respect and dignity.

“It’s very unfortunate that it happened in front of our small business.

“We’ve been struggling and hanging on by a thread, and now our reputation is being dragged through the mud for something that we didn’t do, for something that’s not even affiliated with us,” said co-owner Trena Hamidi.

“We don’t believe in the inhumane treatment of anyone – homeless or not.”

Man sprays water on homeless woman who refused to leave the front of his store.

Don’t be mad at him. This is what happens when a city refuses to do anything about the homeless/drug addiction issue. pic.twitter.com/kOp634Gtui

San Francisco man sprays a homeless person with a hose after she refuses to move from the sidewalk. pic.twitter.com/vnBmgJpwEJ