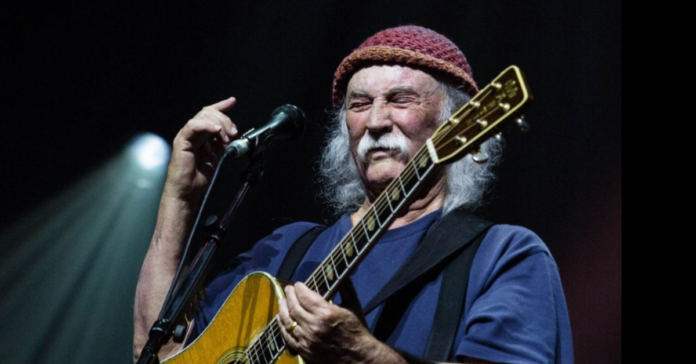 His wife released a statement saying, “It is with great sadness after a long illness, that our beloved David (Croz) Crosby has passed away. He was lovingly surrounded by his wife and soulmate Jan and son Django.

“Although he is no longer here with us, his humanity and kind soul will continue to guide and inspire us. His legacy will continue to live on through his legendary music. Peace, love, and harmony to all who knew David and those he touched. We will miss him dearly.

“At this time, we respectfully and kindly ask for privacy as we grieve and try to deal with our profound loss. Thank you for the love and prayers.”

He was the son of cinematographer Floyd Crosby, who won an Oscar for his work on F.W. Murnau’s 1931 feature “Tabu.”

Raised in L.A. and Santa Barbara, he was an indifferent student who gravitated to acting and music at an early age.

Dropping out of Santa Barbara City College to pursue a career in music, he became involved in the commercial folk music scene via brief membership in Les Baxter’s Balladeers, a Limeliters-styled unit organized by the well-known composer-arranger.

He began working the L.A. folk clubs as a solo act; at a set at the Troubadour, his crisp tenor voice attracted the attention of Jim Dickson, the house engineer at Richard Bock’s L.A. label World Pacific Records.

Dickson began demoing Crosby as a solo artist, but those sessions ultimately culminated in the formation of a band.

David Crosby passed away today at the age of 81.

In 2009 Paul Simon, David Crosby, and Graham Nash performed a cover of the Beatles’ “Here Comes the Sun” at the 25th anniversary of the Rock n Roll Hall of Fame. RIP… pic.twitter.com/U8NXEsImv6

Roger Stone Says Yes, There Absolutely is an "Establishment Plot" to Use DeSantis to Upend Trump

Did You Know We're Losing The Ability To View Stars Year By Year?