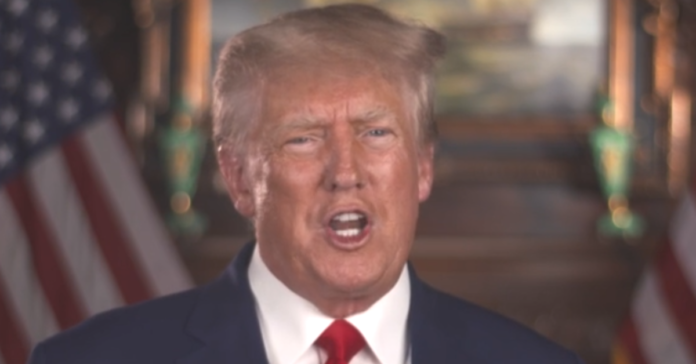 Trump also promised ‘giant rallies’ in the future as his campaign for 2024 heats up. and “wild and exciting” events for supporters as he rolls out his 2024 presidential campaign.

He said: “Making a big political speech today at TRUMP DORAL, in Miami. The Fake News says I am not campaigning very hard. I say they are stupid and corrupt, with the Election still a long time away.

“But do not fear, MANY GIANT RALLIES and other events coming up soon. It will all be wild and exciting. We will save our Country from DOOM and MAKE AMERICA GREAT AGAIN!”

“Judicial Watch, the government watchdog group, today announced that President Donald J. Trump, the 45th President of the United States, will make a keynote address to Judicial Watch’s Annual Roundtable, a private event, which is being held at the Trump National Doral in Miami, FL, on the evening of Thursday, January 19.

“President Trump engaged in a historic battle against government corruption and abuse, a battle which continues to this day,” stated Tom Fitton, Judicial Watch president.

“We are honored he will address and educate Judicial Watch’s supporters about the ongoing rule of law crisis that so threatens our Republic.”

“Judicial Watch is a conservative, nonpartisan educational organization that promotes transparency, accountability and integrity in government, politics, and the law, the group said.

Donald Trump is the only politician that the globalists fear having in the White House.

Trump & MAGA are the greatest threat to the New World Order.

Ivana Trump left behind $34 million of assets when she died in July, according to previously unreported probate documents. @DanAlexander21 joins @dianebrady on “Forbes Talks” to discuss. https://t.co/EG1DAV69fd pic.twitter.com/oijfB2GCit