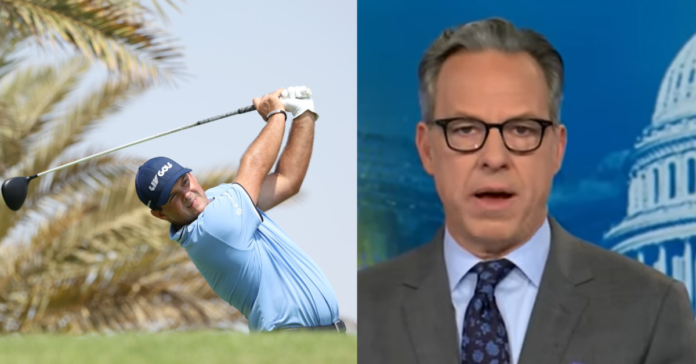 Nine-time PGA Tour winner Patrick Reed reached his limit and is threatening CNN with a $450 million lawsuit over defamatory comments made on air by anchor Jake Tapper and Bob Costas.

Reed’s lawyers claim the comments were “designed to incite ridicule, hatred and violence” against Reed and other LIV Golf players. Reed is now on the Saudi backed and Trump-approved LIV Golf tour. A letter from Reed’s attorneys, Klayman’s Law Group, said:

“This widely viewed broadcast in Florida, the nation and internationally, was not only defamatory but also designed to incite ridicule, hatred and violence against LIV Golf players, such as my client Patrick Reed, a world champion professional golfer, by publishing that he takes ‘blood money’ from the Saudi Public Investment Fund, in the wake of the 9/11 tragedy twenty-two (22) years ago.

“Mr. Reed is not a taker of “blood money,” as he simply plays on a golf tour financed by the Saudi Public Investment Fund, which also owns large shares in a myriad of American companies such as Disney, Boeing, J.P. Morgan Chase, Amazon, Blackrock Inc., Microsoft and many others.

“Indeed, many sponsors of the PGA Tour benefit from this investment fund, and PGA Tour players have recently been granted releases by the PGA Tour to play in the Saudi International Golf Tournament in Jeddah, on February 2-5, 2023, also financed by the Saudi Public Investment Fund.

“Aramco, the oil company owned by the government of Saudi Arabia, also sponsors and finances a number of LPGA events.

Reed wants an on-air apology and if not Klayman says his group reserves the right “to sue Tapper, Costas and CNN pursuant to Florida Statute 770.01 for damages well in excess of $450,000,000 dollars which includes compensatory, actual, special and punitive damages.”

“At one time, I had known Jake Tapper to a moderately honest journalist and commentator, but after the election of President Donald Trump, he sold his soul to the hierarchy of CNN, then headed by rabid Trump-hater Jeff Zucker.

“Ever since, CNN and Tapper pliantly have been on a crusade to destroy Trump, which crusade apparently appeals to CNN’s generally leftist viewership, and reaps profit for the network. Interestingly, a person with the last name Zucker is referenced in the subject broadcast.

“While Jeff Zucker has since been fired at the CEO of CNN over alleged misconduct with a subordinate at CNN, his legacy as a Trump-hater lives on and Tapper continues his unhinged vicious attacks on not just Trump but anyone and anything associated with him, such as LIV Golf, which simply played two events at the former president’s golfing venues in New Jersey and Florida last year, which LIV Golf payed (sic) for.”

Patrick Reed has threatened CNN, Jake Tapper, Bob Costas, and others with a massive defamation lawsuit.

This isn’t the first legal threat Reed has made since joining LIV Golf, either.https://t.co/o7squ3gogv