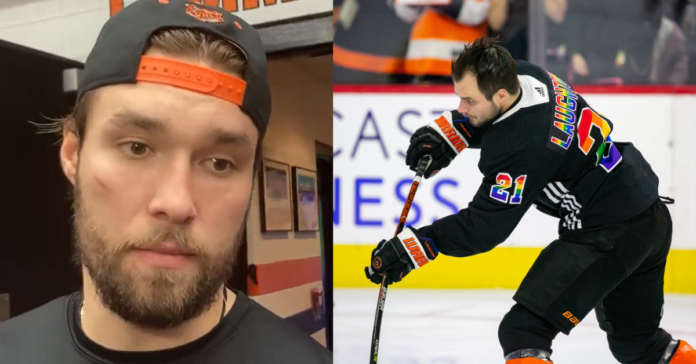 Phidaelphia Flyers defenseman Ivan Provorov refused to show up for his team’s warmups on Tuesday night mounting a boycott on religious grounds of Philadelphia’s decision to have its players wear rainbow-colored jerseys that supported the LGBTQ+ community.

Provorov said he could not wear the jersey due to his Russian Orthodox beliefs. He said: “I respect everybody and I respect everybody’s choices. My choice is to stay true to myself and my religion. That’s all I’m going to say.”

Flyers head coach John Tortorella said backed the move saying: “I think the organization has sent out a release regarding the beliefs that we have. It was really a great night. With Provy, he is being true to himself and to his religion.

“This has to do with his beliefs and his religion.

Flyers defenseman Ivan Provorov on refusing to wear a rainbow jersey for warm ups during “Pride Night” due to his Russian Orthodox faith.
pic.twitter.com/wCUl8slmRB

“That is one thing I respect about Provy, he is always true to himself, so that’s where we’re at with that.”

He said it would have been unfair to bench him.

“I just think it’s unfair. I know you are probably going to talk to Provy.

“I’m not going to spend a lot of time on it.

“I think it was a great night, and I’m not going to get too deep into the conversation.”

Provorov ended up playing a team-high 22:45 minutes in the game. Philadelphia won, 5-2.

The team issued in a statement just before the game that said:

“The Philadelphia Flyers organization is committed to inclusivity and is proud to support the LGBTQ+ community.

“Many of our players are active in their support of local LGBTQ+ organizations, and we were proud to host our annual Pride Night again this year.

“The Flyers will continue to be strong advocates for inclusivity and the LGBTQ+ community.”

Some people were not happy though:

Being LGBT+ is not a “choice.” Being ignorant, obnoxious, and homophobic is a choice.

Ivan Provorov wasn’t wearing uniform tonight and the @NHLFlyers should not have let him play. Stop letting bigots hide behind their cherry-picked religion. Do better. https://t.co/WTnqibGsXj

Of course, Ivan Provorov is more than happy to play pregame dress-up when it does align with his belief system. pic.twitter.com/rOG0uoCsf4

Ivan Provorov was allowed to play in a game for the Philadelphia Flyers – the organization that was the first to say that you will be removed from the arena if you utter a homophobic slur – after refusing to wear a Pride logo for warm ups.

What an absolute disgrace.