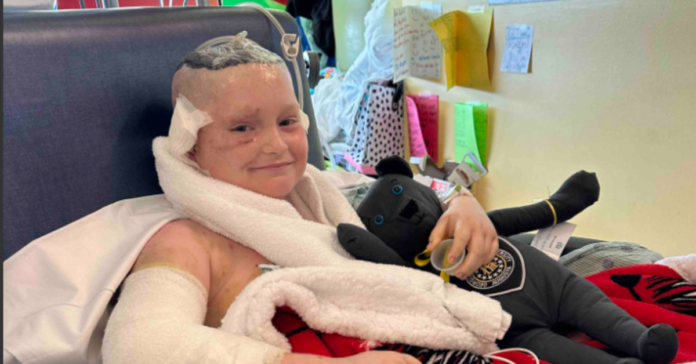 The mother of a boy in Georgia who was dragged into a ditch and mauled by three pit bulls while biking home from a friend’s house issued some updates on his condition.

Ericka Gilstrap said Justin is lucky to be alive after the attack. She said: “By the time he got to him, he could see the dogs and that’s when he called 911. Justin was alone when it happened and that’s what is so heartbreaking to me. He knew he had to be home by 6 and he wasn’t getting in trouble.”

A neighbor and Justin’s grandmother helped fight off the dogs. “She said there was just blood everywhere,” Ericka said. “She couldn’t tell where she was bleeding from  but apparently he was bleeding from everywhere because there’s not an inch of his body that is not covered in a cut or bruise.”

“As a mom, I don’t even know where to touch him,” Ericka said. “When he wants a hug, I’ve got little places on his face I’ll kiss, but I don’t want to hurt him.”

“I’m hoping he’s not going to have PTSD,” Ericka added.

“They did warn me that he probably will need some therapy, just to get him back to where he was.

“He’s sedated, so I don’t know what he remembers, but one time when he woke up, he had tears coming down his face because he started crying.”

His mother gave an update on his condition on the gofundme page that said:

“What little bit Justin has been up today, he just wanted to say Thank You to everyone!” They have raised $227,733 raised to cover his medical bills so far.

I am asking everyone to please pray for Justin. He was attacked by 3 pit bulls tonight. He was rushed in for emergency surgery.

He is currently intubated and sedated at CHOG in PICU.

He is missing 70% of his scalp, has several lacerations and staples, they couldn’t close the wound on his leg, and now he’s running a fever.

The sad thing is we have reported these dogs several times before! Columbia County did nothing! It’s sad it took this for them to finally do something.

I am a single mom of 4 so I am sure I will have to be out of work for a little bit plus all of Justin’s medical bills being he is going to have to have a few more surgeries.

I hate asking for anything but right now I am worried about everything. Any help is appreciated.

Justin Gilstrap, an 11-year-old Georgia boy who was mauled by three pit bulls in his neighborhood, is reportedly suffering from a torn scalp and sever bites on both of his legs. https://t.co/BA7cOWNfIi

Nancy and I each gave $50 last night, hope the young person quickly recovers physically and emotionally