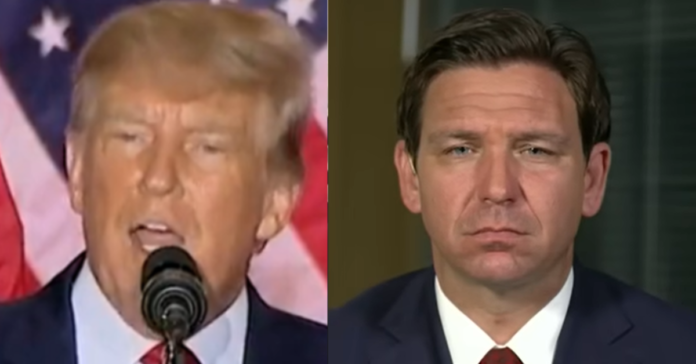 Former President Donald Trump got some good news from a new poll at the expense of Florida Governor Ron DeSantis. Trump is crushing DeSantis by 17 points in a hypothetical GOP primary match-up according to a new Morning Consult poll.

Former U.S. Ambassador to the United Nations Nikki Haley and Sen. Ted Cruz (R-Texas) both had 2 percent. Trump addressed the possible epic battle in the GOP primary against DeSantis saying on the conservative podcast “The Water Cooler” recently:

“I got him elected, pure and simple.

TRUMP ON DESANTIS: “I got him elected — pure and simple. […] There was no reason to go wild about endorsing him. So, you know, now I hear he might want to run against me. So, we’ll handle that the way I handle things.” pic.twitter.com/niHGu3qjjZ

“And there was no reason to go wild about endorsing him.

“So, now I hear he might want to run against me.

“So, we’ll handle that the way I handle things.”

Pollsters found Trump’s favorability rating among potential Republican primary voters to be improving over the past month, with 77 percent having a favorable view of him.

Almost 7 in 10 potential voters have a favorable view of DeSantis.

The poll did show that DeSantis would perform somewhat better against President Biden in a hypothetical general election match-up than Trump would.

WATCH: DeSantis says Biden was a “security risk” for having classified documents behind corvette, defends Trump

“He said that it was incredibly reckless to have classified – he said all this stuff […] You can’t have two different sets of rules based on your political party” pic.twitter.com/KGL0izXOaz

Whoopi Goldberg Heckled On Live TV, Gets Called ‘Old Broad’ By Audience Member On The View

You Thought Ray Epps Was Suspicious...Wait Until You Hear About The NEW J6 "Mystery Man"