Joy Behar Urges Joe Biden To Come Clean And Apologize: “He should have said, ‘look, I know I look hypocritical in that tape,’ yeah, I’m sorry about that’” 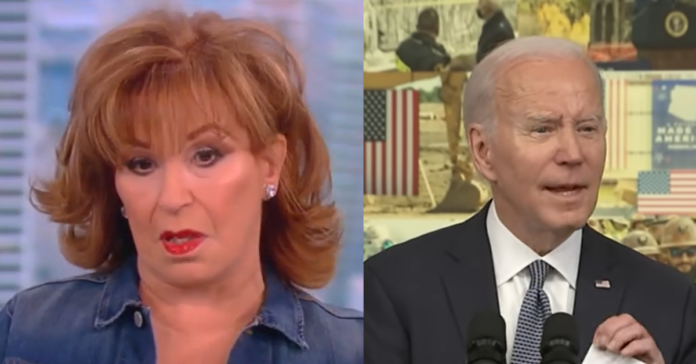 Co-host Whoopi Goldberg said Biden is cooperating with the special counsel and asked the panel “should this be enough to satisfy people? Or does Biden need to do more?” Behar said: “So I think that Biden should speak more.”

Whoopi said: “Well, you know, he has said two or three times, ‘I’m telling you, I’m not sure what these are, but everybody is looking into the work is being done.’ And the false equality that’s being put out is that he’s done something wrong.

ARE BIDEN DOCUMENTS A RISK TO NATIONAL SECURITY? After more documents were found at Pres. Biden’s home from his time as vice president, #TheView panel weighs in on Democrats speaking out and question how the documents should have been handled. https://t.co/cVclFZQmjA pic.twitter.com/EtrFxaUHsB

Joy said: “Yeah, but there also has been I mean, I love Joe Biden and I don’t understand this because I know there’s a difference between what he did and what Trump did.

“A lot of people don’t and will not ever know it because the way it’s covered.

“But it would have been helpful for Joe Biden when it first came out to say, you know, we have tape of Joe Biden saying that Trump did something stupid and shouldn’t have done it and it was bad.

“Well, he should have said, ‘look, I know I look hypocritical in that tape. Yeah, I’m sorry about that.’

“I didn’t know about this.

“And now that I know it, I will do what I can to uncover this.

“I mean, he should be speaking to the American people, or else just act like a Republican and say it’s a witch hunt.

“And he did call Trump careless with these documents.

“And I think it would go a long way for him to also say, and I was careless.

The fabulous @DollyParton tells us how she felt getting inducted into the Rock & Roll Hall of Fame and shares the legendary artists joining her on her upcoming rock album! https://t.co/cVclFZQmjA pic.twitter.com/O4SBF8jBXd

Marie Osmond Refuses to Give Her Kids Money..."It Breeds Laziness"