Heartbreaking Update On Jeremy Renner: “It’s much worse than anyone knows, his loved ones worry the damage was significant enough to prevent him from moving the way he used to if he doesn’t lose the leg altogether” 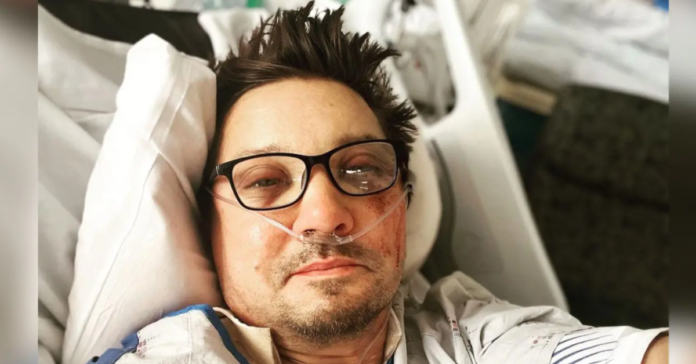 Hollywood star Jeremy Renner’s close friends told Rada Online the actor’s condition is “much worse than anyone knows” weeks after being crushed by a snow plow.

Renner was injured trying to help a stranded family member whose car broke down near the actor’s mansion in Reno, California.  A rep for the actor said he suffered blunt chest trauma and orthopedic injuries when the 14,330-pound machine ran over Renner.

Sources told the news outlet: “It’s much worse than anyone knows. Jeremy is very aware of the fact that he almost died out there. The right side of Jeremy’s chest was crushed, and his upper torso had collapsed.

“He also had a bad head wound that was bleeding and a leg injury.

“Jeremy was in a lot of pain and was having difficulty breathing.

“He knew he was in bad shape and that he might not make it out of this.

“Word is the damage to Jeremy’s chest was so substantial it had to be reconstructed in surgery.

“So far, he’s had two surgeries and he will likely require more in the weeks ahead on his leg.

“Doctors tend to space out operations to allow time for the body’s natural healing process to kick in, and that’s the case here.

“Jeremy’s doing OK,” said a source. He’s pretty doped up and he’s got tubes to help him breathe, but he’s a fighter, and he’s determined to get through this.

“Jeremy’s already had two delicate surgeries. But there are serious doubts he will ever be able to walk right again — or at all.

“His loved ones worry the damage was significant enough to prevent him from moving the way he used to — that is, if he doesn’t lose the leg altogether,” sources said.

“I did send him a text and tell him, ‘Dude, you’re such a warrior and the whole world is behind you right now.’

“We’re all cheering you on, my man.

“I know Jeremy. We made two separate movies many years ago, like 19 years ago in Iceland, and became friends, and he is one of the nicest among actors.

“He’s everybody’s favorite. He’s a super talented guy in every area of life and he’s a lovely, humble guy.”