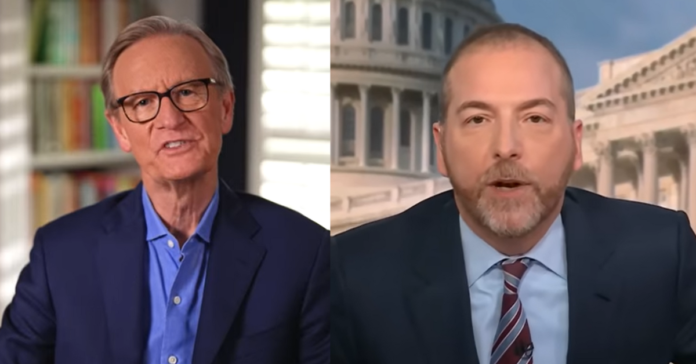 Fox & Friends star Steve Doocy said CBS and NBC should be investigated for allegedly withholding information about President Joe Biden’s classified documents until the midterm elections were over.

Brian Kilmeade said: “The other bigger question is why didn’t we know about this before the election?” Kilmeade asked. “Whose decision was it?”

Ainsley Earhardt said: “Biden said President Trump was ‘irresponsible‘ for having classified information. Meanwhile, we keep finding more at his location, at his office in Washington, three different times, they found classified materials at his Wilmington, Delaware house.

“We want to know why they kept this from the American people before the election. They knew about this days before the midterms.

“Why was Trump’s house raided and not Biden’s house? Why did the FBI take pictures of Trump’s classified documents and not Joe Biden’s, and why weren’t Donald Trump’s attorneys allowed to be inside Mar-a-Lago when they were raiding his house, yet Biden’s attorneys were the ones that found all this classified information.”

“Now, it kind of looks like somebody, maybe on the Democrat side, is trying to sandbag Joe, get rid of Joe for 2024.

“Because this was not an authorized leak from the Department of Justice.

“They kept it quiet for months, and then suddenly, conveniently, new year, what do we learn? We find out all this stuff.”

Kilmeade said Karl Rove told him that CBS, the network that broke the story, had the story in November “and they held it.”

“Why did they hold it?

“Who convinced them to hold it? Since when do you hold a story like this until January?

“And then NBC finds out about the next tranche that was found.

“These are two outlets pursuing a story, and they seem pretty exercised in the press room too.”

“If that is true, then NBC and CBS, if they knew before the election, they both helped the Democrats,” said Doocy, “and that needs to be an investigation.”

.@SteveDoocy: “So few details have been revealed by the president and their team. There must be something really embarrassing.” https://t.co/shc1MmazjY