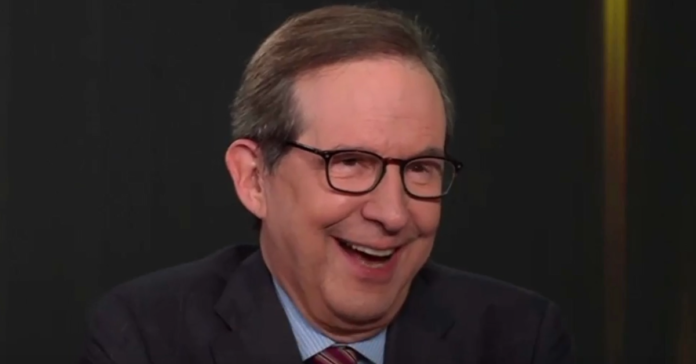 Ex-Fox News star and the leading man at the now-shuttered CNN streaming service, Chris Wallace, took a swipe at his former Fox News colleagues on his new show at HBO.

Wallace made a weird giggle sound before he took his rude swipe at the people who had his back for years and made him a rich man. Wallace was speaking with Andy Cohen when Cohen asked him “who’s the most full of crap person on Fox News?”

Wallace offered a high-pitched giggle before saying it’s hard to ‘distinguish’ who was more full of it among his former co-workers. Below is the video and the transcript of the conversation.

WALLACE: And what happens in plead the fifth?

COHEN: Plead the fifth is the game that you saw Meryl Streep playing and she answered the question. The game is I give you three questions, you can plead the fifth to only one.

WALLACE: So what would your three questions be for me?

COHEN: Okay, what was your least–who’s the most full of crap person on Fox News?

WALLACE: I don’t know that I can answer.

COHEN: So you would plead the fifth.

WALLACE: No, no, no, I just mean that. It’s very hard, it’s hard to distinguish.

COHEN: There’s a lot to parse out there. Favorite and least favorite Mike Wallace interview of all time? And why? And then number three?

What is the biggest lie someone that you’re interviewing has ever told you? So that’s off the top of my head.

WALLACE: Those are good.

WALLACE: I can tell you my least favorite Mike Wallace interview of all time, he interviewed Barbra Streisand.

COHEN: I knew you were gonna say that.

COHEN: I did, I was thinking–I’m not kidding.

WALLACE: No, I actually talked to him, interviewed him about one of his books and I called him out on this, which–

COHEN: Because he kept saying the thing about the lighting and how difficult she was?

WALLACE: No, it’s that he got went to–he interviewed her mother. And he said, “what’s your relationship like with Barbara,” and Barbara Streisand’s mother said “she doesn’t have time for me, she never…”

So he’s in the middle of the interview. And he says, “you know what your mother says about you?” And Barbara starts to cry.

And I said, and I interviewed him, I said, “why would you do that?” He said, “I don’t have subpoena powers. You know, people can–” which is a kind of a BS excuse for I can say whatever I want.

Heartbreaking Update On Jeremy Renner: “It’s much worse than anyone knows, his loved ones worry the damage was significant enough to prevent him from moving the way he used to if he doesn’t lose the leg altogether”