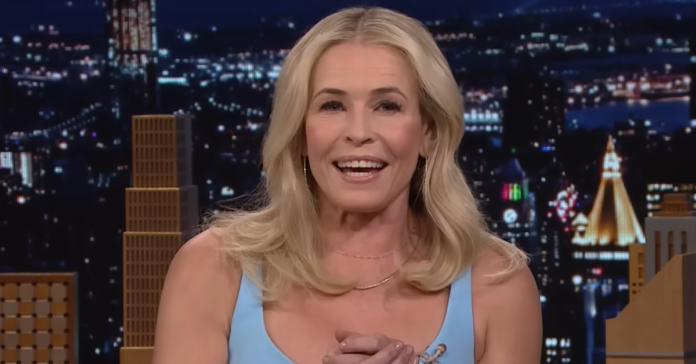 Hollywood star Chelsea Handler went on national television and admitted she thought the sun and the moon were the same celestial bodies until the age of 40 when her sister corrected her.

Handler is 47. Seven years ago she thought the moon and the sun were the same things. Many people on the left listen to Chelsea about many things including politics. This may be why they get so much wrong.

Speaking to Jimmy Fallon, Handler gave no indication that she was lying when she made the shocking statement. She said: “This is true. I didn’t know until I was 40 years old that the sun and the moon were not the same thing.

“My older sister Simone looked up at the sky, and she said, ‘Chelsea, look up. It’s not often you get to see the sun and the moon at the same time.

Chelsea Handler: “I didn’t know—and this is true—I didn’t know until I was 40-years-old that the sun and the moon were not the same thing.”pic.twitter.com/5uplmtri32

“I go, ‘Wait, but they’re always together,’ and as soon as I said that, she turned around and she goes, ‘What did you say?’

“I knew what I said was wrong.

“Is that what an elephant does.’

“She looked at me and I just tried to gloss over it.

“And she said, ‘No, I need you to tell me what you think is happening between the sun and the moon.’

“And I was like, ‘Honestly, I just assumed when the sun went down, it popped back up as the moon.’

“The man riding the elephant spoke no English and went, ‘Pfft!’”

Joy Behar Urges Joe Biden To Come Clean And Apologize: “He should have said, ‘look, I know I look hypocritical in that tape,’ yeah, I’m sorry about that’”