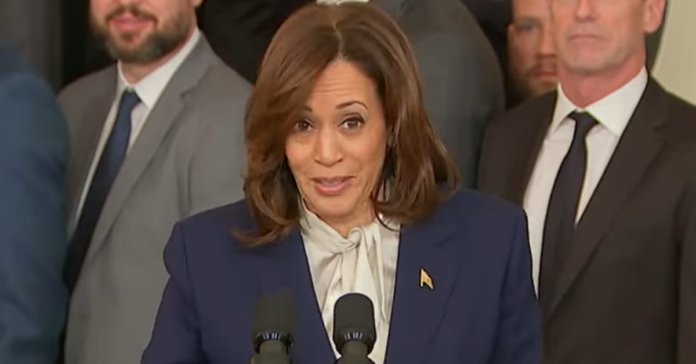 The Border Patrol union slammed Vice President Kamala Harris for doing nothing while illegal immigration explodes in this county despite her being given the job of solving the problem two years ago.

The Union said on social media: “If you were given a job 2 years ago with the explicit goal of reducing illegal immigration, and then you sit around and do nothing while illegal immigration explodes to levels never seen before, you should be fired and replaced. Period.”

The Border Patrol union also ripped President Joe Biden over the crisis. The group posted a photo of Joe Biden on social media with the caption: “The problem with our border captured in one photo.”

“We want America to know that this is real. The Biden administration won’t do a thing about it.

If you were given a job 2 years ago with the explicit goal of reducing illegal immigration, and then you sit around and do nothing while illegal immigration explodes to levels never seen before, you should be fired and replaced. Period. pic.twitter.com/PXQxMm4axs

“They don’t have the guts.”

The 2023 U.S. Conference of Mayors is scheduled to address the immigration issue tomorrow after border states started busing migrants north.

“Record numbers of people are crossing the Southern border, requesting asylum, and needing assistance in cities at or near the border and throughout the country,” the agenda reads.

“The session will focus on Administration policies regarding the migration of asylum seekers and others to the United States, efforts underway to make it more orderly and improve communications, and the information and funding needed to assure that cities and non-governmental organizations within them can meet their needs without reducing services to their existing population.

New York City Mayor Eric Adams said New York was full and could take no more migrants when he went to Texas over the weekend.

“What is happening in Chicago right now, and New York, and Houston, and Los Angeles, and Washington, our cities are being undermined.

“And we don’t deserve this.

“And the people who live in these cities don’t deserve this.

“We expect more from our national leaders to address this issue in a real way.”

The problem with our border, captured in one photo. pic.twitter.com/4UvGz3XaIY

Was The FAA Held "Hostage" in Some Shadowy, Secret Ransomware Attack?