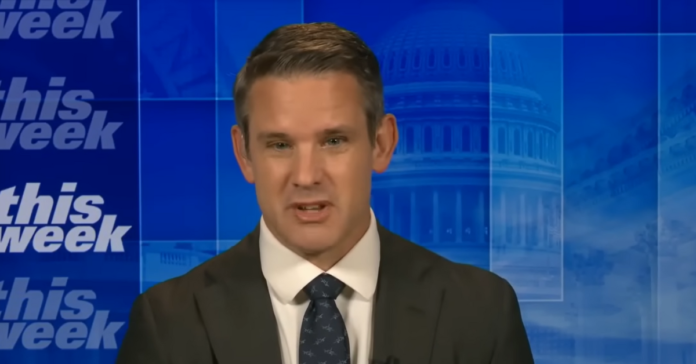 Former GOP Rep. Adam Kinzinger’s PAC is selling signed copies of his Select Committee’s January 6th report. The hardcover edition of the final report comes with Adam’s signature and appears on the website belonging to Country First, an Illinois-based PAC established by Kinzinger in July 2021.

He is selling the report which should be available for free for $100. The listing says: “On January 6, 2021, the United States came perilously close to losing its democracy.

“A mob instigated by the president of the United States violently attacked the Capitol Building in Washington, D.C., seeking to disrupt the certification of the electors in the presidential election and prevent the peaceful transfer of power for the first time in American history.

“This is the official committee report of the investigation into the attack—perhaps the most vital congressional investigation in American history—with exhibits, and witness testimony.

“This hard-bound copy of the historical record is offered as a limited edition and signed by Congressman Adam Kinzinger, who served on the committee.

“All proceeds will benefit charitable organizations working to uphold and defend democracy in America,” the listing says.

Fox News reported earlier that the listing had been removed after questions were raised but the listing is still live.

Adam is also selling baseballs signed by Kinzinger which cost a whopping $50 each.

“Our Sacred Sandlot is being threatened.

“That’s why we’re putting together teams of reasonable people and common-sense solutions. Become part of the solution and donate today to get an official Country First limited-edition American Sandlot baseball signed by Adam Kinzinger!”

“Are you feeling politically homeless in a toxic political environment?

“The Politically Homeless product line shows that toxic party politics are tearing our country apart and that we’re coming together to end the toxicity.

Adam Kinzinger on Kevin McCarthy: “Kevin’s a piece of sh*t.” (From The Bulwark Podcast with Charlie Sykes) pic.twitter.com/sVLj4uVciy

As a Christian let me say this is absolutely not in line with the Bible.

15 “Beware of the false prophets, who come to you in sheep’s clothing, but inwardly are ravenous wolves. 16 You will [a]know them by their fruits. https://t.co/QrABraMCc6

Marie Osmond Refuses to Give Her Kids Money..."It Breeds Laziness"

Was The FAA Held "Hostage" in Some Shadowy, Secret Ransomware Attack?