San Diego’s Rich And Famous Residents Revolt: “We have had enough, we are no longer going to follow other once-great American cities into the abyss of homelessness, lawlessness, and roadside shantytowns” 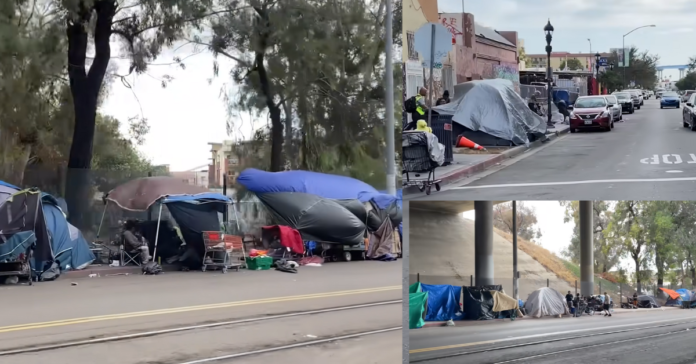 Two San Diego residents have reached their limit with the homeless and crime crisis hitting the city and vowed to stop the city from following ‘other once-great American cities into the abyss of homelessness, lawlessness, and roadside shantytowns.’

They wrote: “Most of us can no longer walk or bicycle our downtown city streets, sidewalks, and parks without facing an obstacle course of tents, bodies, human excrement, needles, trash, and a slew of walking-zombies who are impossible to distinguish between those just down on their luck and others who are out-of-control substance abusers about to attack us.

“We, the civilized taxpayers of our society, are being forced to cede our cities and parks to lawlessness. And that just cycles ever-downward into only more lawlessness.

“The social compact of our once great civilized society is disappearing before our eyes — American cities en masse are nose-diving.

“In San Diego we have had enough. We are no longer going to follow other once-great American cities into the abyss of homelessness, lawlessness, and roadside shantytowns.

“San Diegans are coming together in a grassroots effort to propose an innovative program of what should be the homeless solution for America. It’s called Sunbreak Ranch.

“In San Diego, the true (unreported) homeless numbers are likely significantly more than 20,000 in the city proper, and 45,000 countywide.

“Too many of us have been numbed into thinking this carnage is a fait accompli.

“The vast majority of cities around the world are not committing city-suicide via homelessness like we are. This includes cities rich and poor, large and small.

‘Homelessness is a serious and catastrophic problem.

‘It certainly can, and must, be managed humanely, compassionately, and within the context of a civilized, law-abiding society.

“First, provide real help to our homeless brothers and sisters (and stop pretending that allowing them to sleep, urinate, and defecate on our city streets is helpful or humane to anyone).

“Second, clean up our cities.

“Third, return our cities to the Rule of Law, which is the key component of our social compact and all great civilized and sustainable societies.

“Sunbreak Ranch is designed to be a large-scale temporary ranch in the layout of the old California ranchos.

“The best location in San Diego for this beta test is on the unused empty federal lands just east of Interstate 15 on the Marine Corps Air Station Miramar.

“This location is at the geographic and population heart of San Diego County and easily accessible to everyone. From Interstate 15, exit Miramar Way, head east, and you are there.

“Sunbreak Ranch will be the location and solution center for homelessness.

“It is designed to welcome all homeless persons, each of whom may come and go as they please.

“Individuals can reside in a community tent, or camp on their own in a series of designated and protected areas for families, single mothers, elderly people, veterans, those with dogs, and others as needed.

“There will be free daily shuttle service going to and from downtown San Diego — only 12 miles away.

“Sunbreak will have private security as well as a permanent 24/7 public police station in order to maintain a “clean, healthy, safe and secure environment” for everyone at all times,” they wrote.