MSNBC Gets Nervous, Warns Joe Biden To ‘Clean Up’ Mess: “The stumbling and bumbling around over the past month or so has been pretty extraordinary” 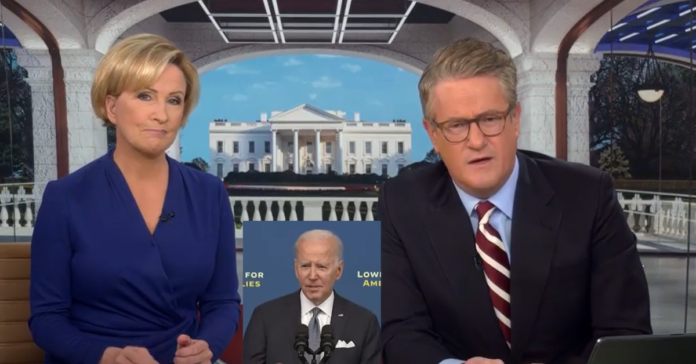 “What’s going on here? The stumbling and bumbling around over the past month or so has been pretty extraordinary since November when they first started discovering these documents.

“They’ll have a press conference and say, ‘Well, we think that’s it. We don’t think there are anymore.’ They don’t know. They haven’t known. What’s happened here? I guess, again, transparency, I think, works best for the Biden administration.

“And it works best for Biden himself because they find the documents, they report it immediately, a far different situation than Donald Trump’s.

Joe Scarborough: “Transparency works best for the Biden Administration…They find the documents. They report it immediately. A far different situation than Donald Trump’s. Anybody who says it’s not is a political hack.” pic.twitter.com/Ie1se3Xf6y

“Anybody who says it’s not is a political hack.

“It’s very clear to see, politically and legally, that there is a huge difference in the two cases.

“And yet Biden’s own worst enemy has been the way Biden’s staff and the way the Biden team has run this.

“Yeah, it’s an important place to start just to underscore the differences between the Biden and Trump cases.

“It’s the drip, drip, drip that’s the problem right now. It’s a story they can’t totally seem to get their arms around.”

“By stumbling and bumbling around, by not getting their timeline right, by still saying, — we just showed a graphic that says, ‘an unknown number of documents found in Biden’s garage.’

“At this stage, we’re two months in.

“They need to clean this up.

“They need to get, you know, amateur hour is over.

“They need complete transparency, and they just mishandled it from day one,” he said.

Flashback!@JoeNBC: “I made it very clear over the past several years, that we can’t send the message out that one man is above the law … the law would suggest [Trump] should be indicted” for mishandling classified materials. pic.twitter.com/jfcbMqM9oR