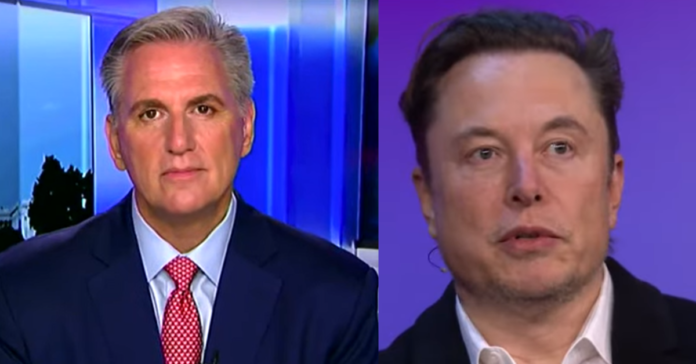 House Speaker Kevin McCarthy (R-CA) said he will do what Elon Musk did with his bombshell Twitter files (that proved Adam Schiff and others violated the US Constitution) and release all information Congress has collected about the attacks of Jan. 6, 2021.

During an interview with Fox News host Maria Bartiromo on “Sunday Morning Futures,” he said: “The best way to handle this is exactly the way Elon Musk handled it. Just put all the information out there and let people see what is truth and what is not.”

“So, the best way to do that is to release the tapes,” he added. “People can know for themselves instead of picking and choosing what views they want people to see.”

“If we go back to ’22 levels, that was what we were spending just two or three weeks ago. That’s not cutting defense by $75 billion.

“Does defense getting more than $800 billion, are there areas that I think they could be more efficient in? Yeah.

“Eliminate all the money spent on ‘wokeism.’

“I want our men and women trained to be able to defend themselves, to secure, to have the best weapons systems possible.

“Why would we sit back and be so arrogant to say no, there’s no waste in government?

“Why wouldn’t we look at all the money that poured out during COVID? What money of that has not been spent?

“Why wouldn’t you pull that back yet?”

GOP Demands Visitor Logs from Biden's Home, Joe Says He Doesn’t Have Them Because House Is ‘Personal’

MSNBC Gets Nervous, Warns Joe Biden To 'Clean Up' Mess: “The stumbling and bumbling around over the past month or so has been pretty extraordinary”