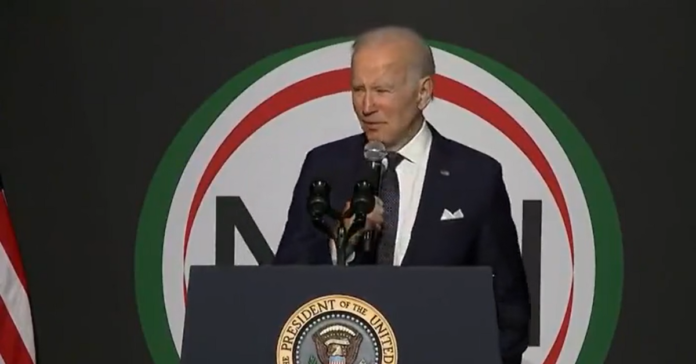 Biden was trying to honor 49-year-old Arndrea Waters King but botched it. He said: “Martin the Third, we celebrate a legacy of your beloved father and mother. They worked for the beloved community. But congratulations today to the honorees including your wife, who I understand it’s her birthday today.

“Well look, my wife has a rule in her family, when it’s someone’s birthday, you sing ‘Happy Birthday.’ You ready?” Biden said before starting the song. But when it came time to say her name Biden fumbled the ball and blurted out “Happy birthday, dear Valz-dvit” after coming up empty.

The White House released a transcript of Biden’s remarks:

I’ve spoken before parliaments, kings, queens, leaders of the world.  I’ve been doing this for a long time, but this is intimidating following.  (Laughter and applause.)  You all are incredible.

I — (applause) — and let’s lay one thing to rest.  I may be a practicing Catholic — we used to go to 7:30 mass every morning, in high school and going into college, before I went to the Black church.  (Laughter.)  Not a joke.  Andy knows this.

Andy and I took on apartheid in South Africa and a whole lot else.  They didn’t want to see him coming.  (Laughter.)

But we used to — that’s where we’d organize to march to desegregate the city.  My state was, like yours, segregated by law.  We were a slave state, to our great shame.  And we had a lot of leftovers of the bad things that come from that period of time.  But I — any rate, that’s another time.  (Laughter.)  But I learned a lot.

And I promise, if any preacher preached to me back then, I’m not going to be nearly as long as you were.  (Laughter.)  Actually, I have a bad reputation for speaking too long.

He followed the path of Moses, a leader of inspiration, calling on the people not to be afraid and to always, always, as my grandfather would say, “keep the faith.”

He followed the path of Joseph.  A believer in dreams, in the divinity they carry, in the promise they hold.

And like John the Baptist, he prepared us for the greater hope ahead, one who came to bear witness to the light.

Reverend Dr. Martin Luther King, Jr. was a nonviolent warrior for justice who followed the word and the way of His Lord and His Savior.

On this day of remembrance, we gather at Dr. King’s cherished Ebenezer.  I say — I emphasize the word “cherished” Ebenezer.  And, by the way, his sis: Every good man, every good brother needs a really strong, strong sister.  (Applause.)  You think I’m kidding.

I’m no Dr. King, and my sister is not you, but I’ll tell you what: She’s smarter, better looking, and a better person than I am.  (Laughter.)  Managed all my campaigns.

Folks, you know, on this day of remembrance, as we gather here at this cherished Ebenezer to commemorate what would’ve been Dr. King’s 94th birthday, we gather to contemplate his moral vision and to commit ourselves to his path — to his path.  The path that leads to the “Beloved Community,” to the sacred place and that sacred hour when justice rains down like waters and righteousness was a mighty stream.

And I want to thank the King family — presumptuous of me to do this, but on behalf of the whole congregation — for being willing to do this year in and year out, because you give so much — so much to the rest of us.  And we love you all.  We love you all.  (Applause.)

To fully honor Dr. King, we have to pay tribute to Mrs. Coretta Scott King, who we dearly miss.  (Applause.)  She led the movement that created the King holiday and so much more.  In my view, this day is her day as well.  (Applause.)

And to Raphael Warnock — a reverend, a doctor, a senator — (applause) — congratulations on your historic victory.  (Applause.)

A fellow Morehouse man.  (Applause).  I’ve come to know a lot of Morehouse men.  (Laughter.)  That old saying, “You can’t tell them much.”  (Laughter.)  But I tell you what — we’ve set up, for the first time ever at the White House, a Divine Nine committee.  It’s active every day.  (Applause.)  And I watch how the other graduates pick on the Morehouse men.

You stand in Dr. King’s pulpit, and you carry on his purpose.  And this service doesn’t stop at the church door.  It didn’t with Dr. King, it doesn’t with you, and it doesn’t with the vast majority of you standing — sitting before me.

I want to thank you for the honor of inviting me to be call to America’s — “America’s freedom church”.

Joe Biden decided to sing happy birthday to MLK III’s wife and clearly forgets her name. This is straight out of “The Office.” Amazing: pic.twitter.com/V1TAfNLgFn

And thank you to this congregation and to all the distinguished guests, elected and unelected officials that are here today who’ve done so much over so many years.  And so many young people are going to do so much more than we were able to do.   (Applause.)

What’s your name honey?  (Gestures to girl in front row.)  Well, it’s good to see you.  Maybe I can have a picture with you when I — before I leave, okay?  Is that all right?

San Diego’s Rich And Famous Residents Revolt: “We have had enough, we are no longer going to follow other once-great American cities into the abyss of homelessness, lawlessness, and roadside shantytowns”