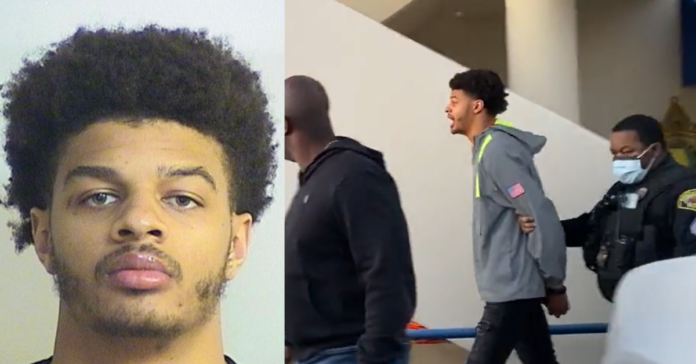 University of Alabama basketball player Darius Miles openly wept as he was taken to the Tuscaloosa County Jail Sunday to be booked on a capital murder charge. Miles and Michael Lynn Davis were arrested and charged with capital murder in the shooting death of Jamea Jonae Harris on The Strip just before 2 am this morning.

They both face execution if convicted. Police say they believe the shooting death was over nothing, a minor altercation, and that the victim did not know her killers. If so that explains the waterworks from the star player who threw his promising life away for no reason.

In the video below you can see Miles, 21, weeping as he was stuffed and cuffed by the cops. He cries out to someone, “I love you…I love you more than you can imagine.” Tuscaloosa Violent Crimes Capt. Jack Kennedy said:

“It appears at this time that the shooting was the result of a minor argument that occurred between the victims and suspects after they encountered each other along the strip.

“The member agencies of the Violent Crimes Unit utilized all their resources and worked together flawlessly to bring this case to a resolution in a rapid manner.

“First and foremost, we extend our deepest sympathies to the family and friends of the victim from last night’s incident.

“We were made aware of the recent charge against student-athlete Darius Miles, and he is no longer a member of the Alabama men’s basketball team.

“Athletics, in conjunction with the University, is fully cooperating with this investigation.

The University of Alabama said:

“The University of Alabama’s utmost priority is the safety and well-being of the campus community.

“We are grieved by the incident that occurred near campus last night and extend our deepest condolences to the victim’s family and friends.

“We are grateful for the quick and thorough response of law enforcement and emergency response teams, and we will continue to fully support the ongoing investigation.

“We were made aware of the recent charge against student-athlete Darius Miles; he has been removed from campus and is no longer a member of the Alabama men’s basketball team.”

University of Alabama basketball player Darius Miles cried out to loved as he’s taken to the Tuscaloosa County Jail Sunday. Miles and Michael Lynn Davis were both charged with capital murder in the shooting death of Jamea Jonae Harris on The Strip just before 2am this morning. pic.twitter.com/Q4SPJryoyi

[VIDEO] Pelosi's Smug Reaction to Joe's Classified Docs Scandal Was to Smirk and Stuff Food in Her Face...