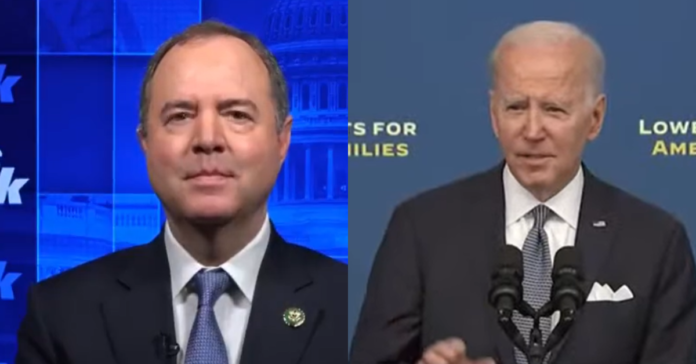 ABC News reporter Jonathan Karl asked Adam if Biden may have “jeopardized” national security by taking the documents that were found in multiple locations. Schiff said: “I don’t think we can exclude the possibility without knowing more of the facts.

“We have asked for an assessment in the intelligence community of the Mar-a-Lago documents. I think we ought to get that same assessment of the documents found in the – in the think tank, as well as the home of President Biden.

“I think that would be appropriate and consistent with what we requested in the case of Mar-a-Lago.”

Karl asked Schiff if the WH “should they have been more forthcoming? Should this information have been revealed earlier?”

“I think the administration will need to answer that question. I’m going to reserve judgment until they do.

“But I think it’s important to point out that the Biden approach was very different in the sense that it looks, as far as we can tell, that it was inadvertent that these documents were in these locations.

“When they were discovered, they were immediately provided to The Archives or to the Justice Department.

“All of that is a very sharp contrast to Donald Trump’s handling of the situation.

“So, as you point out, this is a very different matter. But, nonetheless, I think it’s appropriate for special counsel to look into both situations.”

Schiff said of Garland apppinting a special counsel to investigate the scandal:

“I do think it’s the right move.

“The attorney general has to make sure that not only is justice evenly applied, but the appearances of justice are also satisfactory to the public.

Rep. Adam Schiff, a former chair of the House Intelligence Committee, tells @JonKarl that Attorney General Garland made the right move by appointing a special counsel in Biden documents case.

“I still would like to see Congress do its own assessment.” https://t.co/ndQmL4Gr7U pic.twitter.com/Tcaen00Q9W

“But, yes, I think the special counsel was appropriately appointed.”

GOP Demands Visitor Logs from Biden's Home, Joe Says He Doesn’t Have Them Because House Is ‘Personal’