Tim Tebow Gets Surprised With Rare Honor During Live TV Broadcast: “All glory to God” 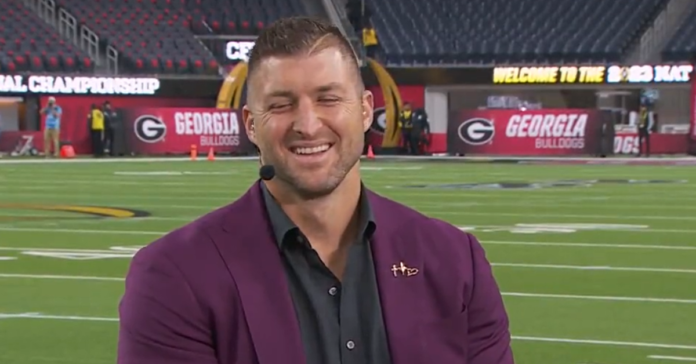 Heisman Trophy winner and former NFL player Tim Tebow was surprised on national television with the news he received a rare honor that cements his legacy as one of the best college football players in history.

ESPN host Joe Tessitore announced a list of 18 players and four coaches who were inducted into the College Football Hall of Fame. Tebow was on the broadcast but his name was not called.

“I forgot one name here,” Tessitore said. “The graphic was missing this because we also have a new Hall of Famer. He is arguably the most popular, the most successful, the singularly most impactful college football quarterback of the last generation or perhaps ever to play.”

“Timmy, congratulation,” he said letting Tebow know he was inducted into the hall of fame.

The moment @TimTebow found out he made it in his first year of eligibility was special ❤️ pic.twitter.com/hLveOM2bCT

“If there has ever been a first-ballot College Football Hall of Famer, it’s this guy.”

“We know what you were as a player, but your commitment to the sport and the goodness that you’ve brought to everybody through the sport — you’re a Hall of Famer in every possible way.”

“This is incredible. Did you guys plan this or something? Honestly, it’s just so humbling.

“Thank you. There’s so many people that are a part of this.

“My granddad dreamed of getting the chance to see Florida win an SEC championship and he died before that happened.

“Something that’s a lot bigger than just a pigskin.

“You’re playing for family, for relationships, for loved ones.

“That’s why college football is unrivaled to me. Special game.”

“Just incredibly honored and grateful for the opportunity and all who helped make it possible!! All glory to God.”

Hard to put into words right now. Just incredibly honored and grateful for the opportunity and all who helped make it possible!! All glory to God 🙌🏼 https://t.co/NU1oynKFjc

My hope and prayer is that this year we are passionate about the cause of Christ. Because honestly, it’s the only thing that’s truly worth it. Thanks again @louiegiglio and @shelleygiglio for having me at @passion268 pic.twitter.com/MRqWPzEqhN

One day we’ll see the big picture. One day we’ll see how this puzzle’s put together, how it all works out. But until then, let’s rejoice. Let’s remember the Lord is near. And let’s express confidence in our God because we trust His plan.