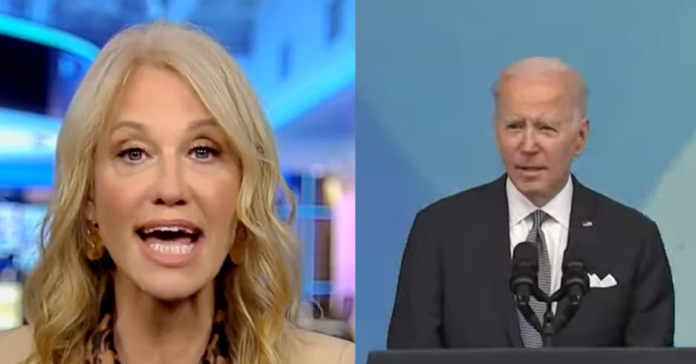 Fox News contributor Kellyanne Conway warned President Joe Biden that the honeymoon is over and the media is turning on him after the classified documents scandal. She said:

“The new facts are not good for President Biden. Why? Well, because it doesn’t matter, really, if the law doesn’t care if you are handling them because you’re sloppy or because you’re surreptitious.

“If the purpose of the intent was to conceal or you were just being convenient, the law was very cut and dry. And I think that’s the difficulty for Team Biden right now. The reason I say that is Joe Biden is going to spend his 175th day today in Delaware since he’s been president.

“That’s a lot of days. We don’t know who else had access to these documents.

“I think beyond the right wing in social media today, people are taking note that Hunter Biden claimed that home as his residence for several years had a driver’s license in that home.

“We already know what happens when he’s left to his own devices. There are going to be investigations into his dealings in China and Russia and Ukraine and whatnot.

“But more fundamentally, the Biden people came to town and said the adults have arrived.

“The buttoned-up, tightened-up crew is here of professionals.

“We know we’re not the ragtag team of Keystone cops that Trump had around him.

“We know how to handle classified information.

“And I think the blasé, almost benign response from the White House and from President Biden himself is most concerning to me.

.“They are worried about it.

“You know what they should worry about? The mainstream media trying to crack a little bit on this,

“The headlines today were terrible for them.

“The chyrons in places like CNN. The questions from the press briefing room, they all sound like Peter Doocy today actually asking the tough, probing questions,” Conway said.

“We’ve got to get back to a citizen legislature…and make sure people aren’t there forever. — @KellyannePolls reveals why Congress needs term limits. Listen, only on @QuakeMedia: https://t.co/k2zVoMLkqP pic.twitter.com/XhPwOXxFl0