Damar Hamlin Makes Triumphant Return To Buffalo Bills, Greets Teammates and Stands On His Own 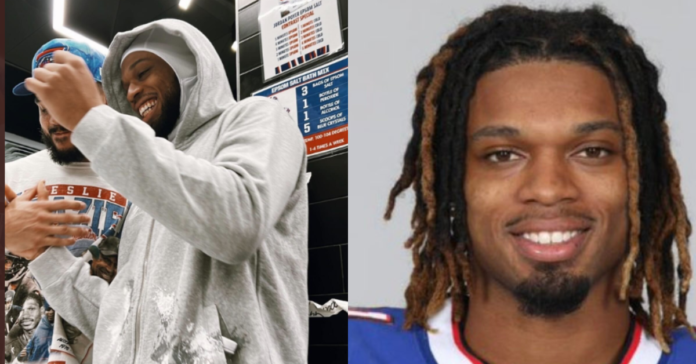 Damar Hamlin made his triumphant return to the Buffalo Bills today to greet teammates ahead of tomorrow’s playoff game between the Bills and the Miami Dolphins. The Bills safety suffered cardiac arrest and collapsed on the field during a game against the Bengals on Jan. 2.

In a social media post, Damar was seen back in the team’s facilities in Orchard Park. Linebacker Matt Milano posted a photo on his Instagram of Hamlin greeting teammates, smiling, and standing up on his own.

Star quarterback Josh Allen said the whole experience brought him closer to God. He said: “I said this in my press conference the other day, there was just kind of kind of a spiritual awakening really for me, and I know for a lot of other people that maybe didn’t have the strongest belief, or wasn’t one of the biggest, strongest Christian followers.

“It’s something I’ve never felt before.

“It’s something I know a lot of my teammates have never felt before.

“You can’t really do anything but accept it and lean on your brothers and share that moment with them.

Damar Hamlin has reunited with his Bills teammates 🙌 ❤️ 💙

“It’s been so long since I’ve actually been to church. I went this last offseason one or two times, but not as much as maybe I should.

“But again, I think this conversation that we’re having right now, we’ve had all these conversations in our locker room.

“It’s been really cool to see how guys have been moved and touched by this whole instance and situation, and to see the country come together in support for Damar and maybe having those talks.

“Again, it doesn’t matter what you think and who you think in; I’m not going to judge based on any of that. But to hear some of these stories and just feelings from our guys, to be going through this situation, it’s been really cool to see that unfold in front of us.

“Again, I can’t chalk it down to anything else but a Higher Power. Yeah, I’m extremely moved. I don’t really have the words to explain it.”

“To have a coach that’s open and willing to share how he’s feeling and not afraid to show emotion — that’s something that he’s always told us. He wants us to be ourselves, he wants us to show our character and be the men we think we are. Again, I have so much respect for him and how he handled the whole situation,” he said of coach Sean McDermott

McDermott is an outspoken follower of Christ.

“I’m a Christian man to begin with, and I’m not afraid to say that,” the coach said last week.

“Glory to God for His keeping Damar and his family in the palm of His hand over the last couple of days and His healing powers.”

Damar Hamlin finished third on the #Bills in tackles this year at 91. He was also T9 in sacks and T2 in forced fumbles. Dude was having a year! I look forward to seeing @HamlinIsland back on the field before too long.

Damar Hamlin paid a visit to the Bills 🥹