Kevin McCarthy Will Consider Expunging Trump’s Impeachments: “I understand why individuals want to do it, and we’d look at it” 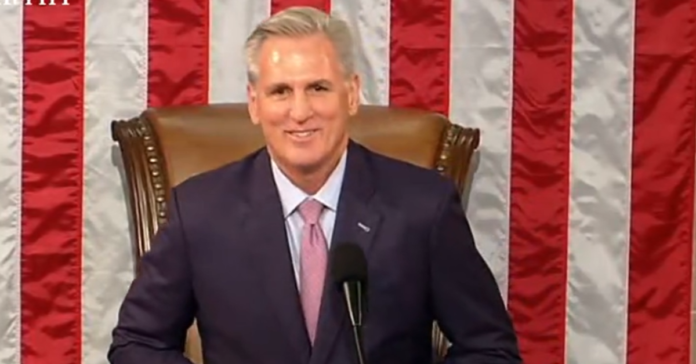 Speaker Kevin McCarthy (R-Calif.) said yesterday that he would be open to expunging one or both of former President Donald Trump’s impeachments. Trump was impeached twice in the House but was acquitted twice in the Senate.

“I would certainly be interested in it,” Rep. Andrew Clyde of Georgia said. Rep. Pat Fallon of Texas said he’s “definitely interested” in expunging Trump’s impeachments.

In the last Congress, a group of more than 30 House Republicans led by Rep. Markwayne Mullin (Okla.) offered a resolution to expunge Trump’s impeachment.

The resolution was supported by the Republican Conference Chairwoman Elise Stefanik (N.Y.).

Fox News reported at that time:

House GOP Conference Chair Elise Stefanik and more than two dozen of her colleagues are supporting a resolution to “expunge” former President Donald Trump’s second impeachment – as pro-Trump Republicans push to rally voters ahead of the midterms.

Rep. Markwayne Mullin, R-Okla., is leading the resolution, which would apply to Trump’s 2021 impeachment in the wake of the attack on the Capitol by a mob of Trump supporters.

It’s similar to a previous resolution Mullin introduced on Trump’s first impeachment, which concerned him allegedly withholding military aid from Ukraine in exchange for political favors.

The Daily Beast first reported on the existence of the more recent resolution. But the support for it by Stefanik and other Republicans, including House GOP Conference Vice Chair Mike Johnson, R-La., was not revealed until Wednesday.

And although it will not pass the Democrat-controlled House, it underscores Republicans’ continued support for Trump nearly 16 months after he left office.