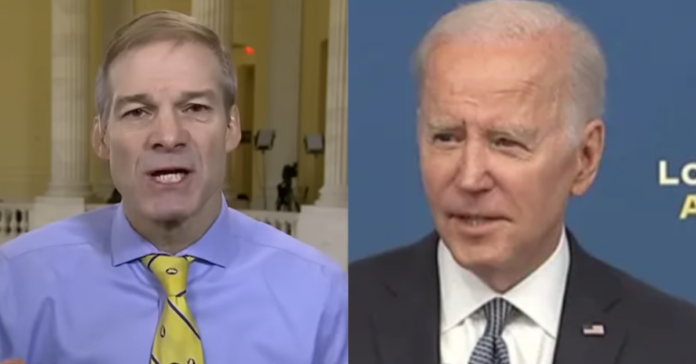 They wrote: “We are conducting oversight of the Justice Department’s actions with respect to former Vice President Biden’s mishandling of classified documents, including the apparently unauthorized possession of classified material at a Washington, D.C., private office and in the garage of his Wilmington, Delaware, residence.

“On January 12, 2023, you appointed Robert Hur as Special Counsel to investigate these matters. The circumstances of this appointment raise fundamental oversight questions that the Committee routinely examines. We expect your complete cooperation with our inquiry.

“In fact, on August 8, 2022, despite the publicly available evidence of President Trump’s voluntary cooperation, you personally approved the decision to seek a warrant for excessive and unprecedented access to his private residence.

“On August 15, 2022, Committee Republicans wrote to you and FBI Director Christopher Wray requesting documents and information related to the FBI’s raid of President Trump’s residence.

“It is unclear when the Department first came to learn about the existence of these documents, and whether it actively concealed this information from the public on the eve of the 2022 elections.

“It is also unclear what interactions, if any, the Department had with President Biden or his representatives about his mishandling of classified material.

“The Department’s actions here appear to depart from how it acted in similar circumstances.

“The Department and FBI have failed to sufficiently comply with this request. Our requests remain outstanding,” they said.

I am here today to announce the appointment of Robert Hur as a Special Counsel, pursuant to Department of Justice regulations governing such matters. In keeping with those regulations, I have today notified the designated members of each House of Congress of the appointment.

I am joined today by John Lausch, the U.S. Attorney for the Northern District of Illinois, who conducted the initial investigation into the matter that I will describe today.

On the evening of November 4, 2022, the National Archives Office of Inspector General contacted a prosecutor at the Department of Justice.

It informed him that the White House [Counsel] had notified the Archives that documents bearing classification markings were identified at the office of the Penn Biden Center for Diplomacy and Global Engagement, located in Washington, D.C.

That office was not authorized for storage of classified documents. The prosecutor was also advised that those documents had been secured in an Archives facility.

On November 9, the FBI commenced an assessment, consistent with standard protocols, to understand whether classified information had been mishandled in violation of federal law.

On November 14, pursuant to Section 600.2(b) of the Special Counsel regulations, I assigned U.S. Attorney Lausch to conduct an initial investigation to inform my decision whether to appoint a Special Counsel.

Mr. Lausch has served as the U.S. Attorney in Chicago since 2017. Before that, he spent more than a decade as an Assistant U.S. Attorney in that same office. I selected him to conduct the initial investigation because I was confident his experience would ensure that it would be done professionally and expeditiously.

President Biden’s counsel informed Mr. Lausch that those documents were among other records from the period of the President’s service as Vice President. The FBI went to the location and secured those documents.

In the days since, while Mr. Lausch continued the investigation, the Department identified Mr. Hur for appointment as Special Counsel.

When I first contacted Mr. Lausch about this matter, he said he could lead the initial investigation but would be unable to accept any longer term assignment because he would be leaving the Department in early 2023 for the private sector. U.S. Attorney Lausch and his team of prosecutors and agents have conducted this initial investigation with professionalism and speed. I am grateful to them.

Earlier today, I signed an order appointing Robert Hur as Special Counsel for the matter I have just described.

The document [order] authorizes him to investigate whether any person or entity violated the law in connection with this matter.

The Special Counsel will not be subject to the day-to-day supervision of any official of the Department, but he must comply with the regulations, procedures, and policies of the Department.

Kevin McCarthy Doubles Down: “If you got the briefing I got from the FBI, you wouldn’t have Swalwell on any committee”