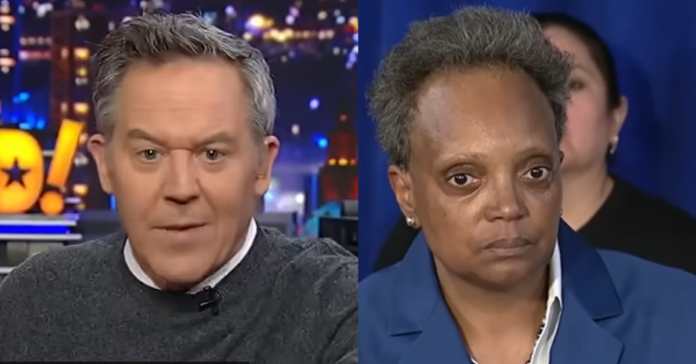 Fox News’ Greg Gutfeld called out Chicago Mayor Lightfoot after her latest scandal threatened to sink her re-election bid. Chicago voters will go to the polls at the end of February.

Lightfoot was busted by a reporter asking public teachers to help her recruit students to volunteer on her failing campaign. It’s a desperate move when crime is out of control and the number one issue on the minds of voters.

Greg said: “She’s not fighting for crime, She’s fighting for power. It does show the difference between Democrats and Republicans. Republicans tend to confront their problem children, be it George Santos or somebody else.

“The Dems just elect them, you know, to be a historical first.

“She’s the first mayor to be under the thumb of cartels.

“She dresses like she pantsed the Salvation Army bell ringer.

“Why don’t the Democrats call her out on her record?

“Why don’t they say anything?

“It’s because they’re cowards, and two, she’s protected by her diversity shield. Right?.

“So they’re willing to let the city just be run into the ground.

“The overwhelmingly black and poor half of the city is where most of the gang violence is happening.

“Chicago is on track now to have over seven- or had – over 700 murders and led the nation by far in murders last year. So she runs on a very tenuous record.

“The problem from her point of view politically is that now that fear of crime, that absolute terror has people on the north side of town, the more affluent side of town, getting private police forces, security guards.

“So it’s there. The whole tempo of life in the Windy City has been undermined,” he said.

Now we know the campaign did the same to City Colleges of Chicago instructors’ official emails.https://t.co/TxA0GtaGVl

Was Mayor Lightfoot aware that her campaign was pressuring teachers and students to support her using their CPS email addresses, which is a clear violation of her OWN ethics policy and potentially illegal? pic.twitter.com/BWbC3yPe74