Peter Doocy Flusters Joe Biden: “Classified materials next to your corvette? What were you thinking?” 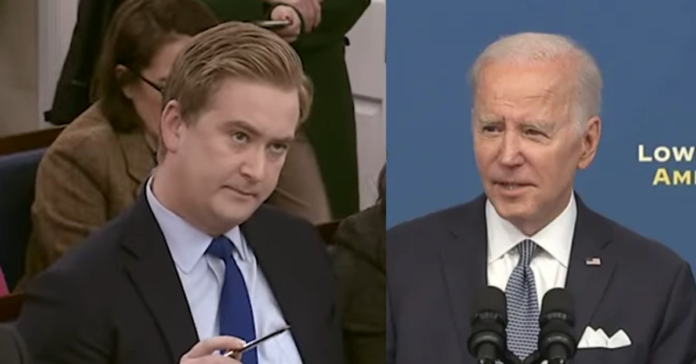 President Joe Biden was forced to answer questions he didn’t want to try to head off a major scandal over classified documents. Classified documents have now been found in Biden’s DC think tank and at his Delaware home.

Trump is under criminal investigation for mishandling documents and for obstructing the feds. But this second batch and Biden’s seeming cluelessness complicate Attorney General Merrick Garland’s case against Trump.

Biden came clean to the media today to try to spin away his case and keep the criminal case against Trump alive but Fox News peter Doocy ended that when he called out and flustered Joe.

Doocy: “Classified materials next to your corvette? What were you thinking?

Doocy: “Classified materials next to your corvette? What were you thinking?

Biden: “My corvette is in a locked garage.”

He then struggles to read off a script pic.twitter.com/UYGiFGnJBP

Biden: “I’m going to get a chance to speak on all of this, god-willing, soon.

“My Corvette’s in a locked garage, okay? So, it’s not like they’re sitting out on the street.”

Biden then turned to his script for help but the damage was done.

“As we stated, previously, we are fully cooperating with the national archives and the Department of Justice in a process to ensure that any Obama-Biden administration records are appropriately in possession of the archives.

“Following this discovery of government documents at the Penn Biden Center in, November 2022, and coordinating closely with the Department of Justice, the president’s lawyers have searched the president, Wilmington and Rehoboth Beach, Delaware residences, the other locations where files from this presidential office might have been shipped in the course of the 2017 transition.

“During the review, the lawyers discovered among personal and political papers a small number of additional Obama-Biden administration records with classified markings.

“All but one of these documents were found in the storage space in the President’s Wilmington residence garage.

“One document consisting of one page was discovered among store materials in an adjacent room.

“No documents were found in the middle of the Rehoboth beach house residence.

“The White The White House will continue to cooperate with the review by the Department of Justice.”

.@pdoocy: “Classified materials next to your Corvette?
What were you thinking?”

President Biden: “I’m going to get a chance to speak on all of this, god-willing, soon…My Corvette’s in a locked garage, okay? So, it’s not like they’re sitting out on the street…” pic.twitter.com/1gVvJo0dfH

Statement from White House Counsel’s Office on ongoing cooperation with the Archives and Department of Justice: pic.twitter.com/Dn3F8Oqggd