Kevin Costner Issues Heartfelt Statement To Fans About Why He Had To Miss His Big Night: “I’m so sorry for everyone who might have been tuning in to watch” 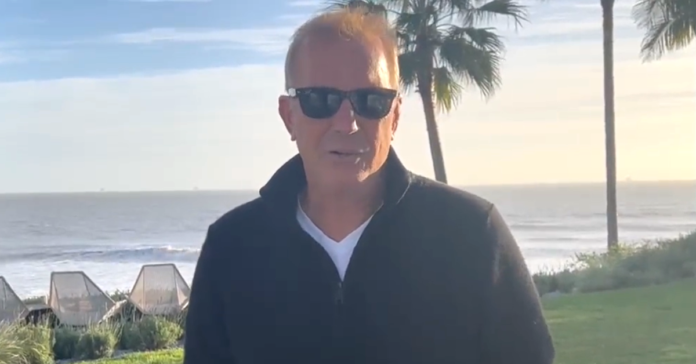 Kevin Costner posted a sincere video to his fans explaining why he had to miss his big night at the Golden Globes. Costner was finally honored, after years of frustration for fans of the show, for his portrayal of John Dutton in the modern western.

Costner said: “Hi everyone, look. I’m so sorry to everyone who might have been turning in to watch the Golden Globes. Chris and I aren’t going to be able to be there. Yesterday, we had to pull the kids out of school, and in Santa Barbara, this is the second time in five years the freeways flooded out.

“We found ourselves on the wrong side of town and couldn’t get back last night. We couldn’t even get back to the house this morning in time with the freeways closed. Nobody’s sadder than us that we can’t be there at the Golden Globes.

“Chris had a beautiful dress, I was looking forward to walking down the red carpet with her.

“The people at Yellowstone, my castmates, my directors who have been directing me, I’m just so sorry that I can’t be there. I really wanted to.”

Presenter Regina Hall announced Costner’s win and went off-script to explain why the Yellowstone star was not there.

“Jesus. No, this is a sad story right now. He’s stuck in Santa Barbara. Let’s pray, everyone. No, that’s awful,” she joked.

Yellowstone started off with a small audience which grew each year. The show’s fans came mostly from America’s heartland during the early days but a move to Sunday night exposed the show to a wide audience.

The show has gone on to smash records and become one of the top-rated shows on television.

The show spawned multiple hit spinoffs with more in the works.

He gave his acceptance speech on social media where he graciously thanked the fans of the show for sticking with it and making it the surprise hit of the last few years.

“I share this recognition with my castmates, the producers, and our incredible crew.

“Most of all, thank you to our show’s fans, who love Yellowstone Ranch as if it were their own.”

Regina Hall finding out why Kevin Costner couldn’t be at the #GoldenGlobes just won next year’s #GoldenGlobes for Best Actress in a TV Comedy pic.twitter.com/5WjI6zosdn

Most of all, thank you to our show’s fans, who love Yellowstone Ranch as if it were their own.

Elon Musk Catches Them In The Act: “One of the greatest outbreaks of mass delusion in U.S. history built on the craven dishonesty of politicians and reporters”