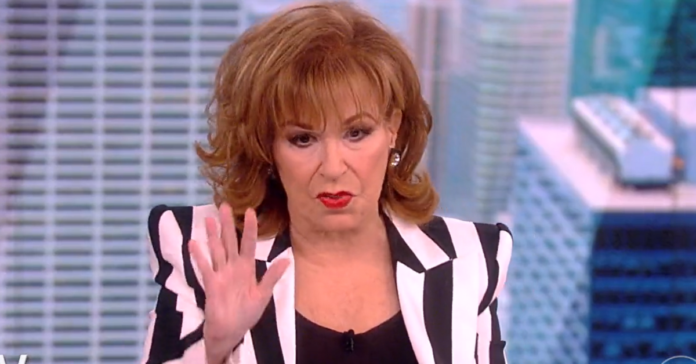 The View host Joy Behar threw in the towel in her public effort to get former President Donald Trump charged with a crime. Joy enthusiastically believes Trump committed a crime and every time a scandal pops up she tells her audience this is the one that will bring Trump down.

It hasn’t happened yet, but Joy was convinced Trump’s classified document case was a slam dunk. Joy told her audience many times how the case was airtight and would finally get Trump before a jury. You get the feeling, the way she cheerleads for Trump’s demise, that she has champagne in her dressing room for the occasion.

But before Joy got a chance to pop the cork, classified documents were found in President Joe Biden’s think tank and a garage at his home in Delaware all but ending the case against Trump.

Garland appointed a special prosecutor to investigate Joe Biden and many believe he wouldn’t do that if there wasn’t more to the story.

Joy was shaken by the news of Biden’s blunder. She did not take it well. She whined about how close they were to getting Trump before calling Donald the luckiest person she knows.

“Just as we’re this close to getting him, somehow these documents appear…I’ve never seen a luckier person than Donald Trump.”

“Let’s find out what this is first.

“Again, one of the things that gets me crazy is before we know, it’s already been spun a specific way.

“I want to see someone explain to me, how it’s possible that after all this time, nobody knew.

“Because to me, if you are missing classified information — I don’t mean to laugh, but in my house, if stuff is missing, I know it’s missing.”

Goldberg was asked if she though the GOP was behind the document discovery.

“I did originally, but not now, because one of the things he’s saying is that, you know, some of the locations where the docs may have been shipped during the transition and may have gotten taken and put.”

Kathy Chung, the deputy director of protocol at the Pentagon, was interviewed as part of the Justice Department’s investigation into the handling of classified documents from President Biden’s time as vice president, a Defense Department official tells CNN.

Chung previously worked as Biden’s executive assistant while he was vice president. She did not respond to CNN’s attempts to contact her. Chung’s interview was first reported by NBC News.

WILL REP. GEORGE SANTOS RESIGN? Just days after the new congressman was sworn in, #TheView panel reacts to some Republicans now calling for his resignation after he has acknowledged lying or embellishing details of his past. https://t.co/cVclFZQU98 pic.twitter.com/hhmOO1RV2X

Priscilla Presley Breaks Silence, Asks For Prayers For Daughter Lisa Marie: Please keep her and our family in your prayers, she is now receiving the best care”

Alan Dershowitz Is 'Absolutely Confident' Trump Won't Be Indicted For Docs: “That has gone out the window completely today”