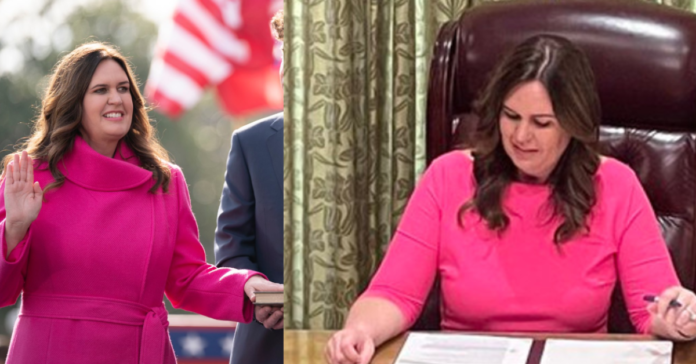 Sarah Huckabee Sanders wasted no time after being sworn in as Arkansas Governor issuing a series of executive orders to push her agenda. In one, Sarah ordered the state to remove the woke term “Latinx” from all official Arkansas state documents.

The order calls for the state to replace  “Latinx” and “Latinxs,” with variations of “Hispanic,” “Latino,” or “Latina.” “One can no more easily remove gender from Spanish and other romance languages than one can remove vowels and verbs from English,” the order says.

The full order says: “WHEREAS: Ethnically insensitive and pejorative language has no place in official government documents or government employee titles;

“WHEREAS: The government has a responsibility to respect its citizens and use ethnically appropriate language, particularly when referring to ethnic minorities;

“WHEREAS: According to Pew Research, only three percent of American Latinos and Hispanics use the word “Latinx” to describe themselves;

“WHEREAS: The Real Academia Española, the Madrid-based institution which governs the Spanish language, has officially rejected the use of “x” as an alternative to “o” and “a” in Spanish;

“WHEREAS: One can no more easily remove gender from Spanish and other romance languages than one can remove vowels and verbs from English; and

“WHEREAS: It is the policy of the Governor’s administration to prohibit the use of culturally insensitive words for official state government business.

“NOW, THEREFORE, I, SARAH HUCKABEE SANDERS, acting under the authority vested in me as the Governor of the State of Arkansas, do hereby order the following:

“This Executive Order shall become effective upon its signing and shall remain in full force and effect until amended or rescinded by further executive orders,” the order says.

“Ethnically insensitive and pejorative language has no place in official government documents or government employee titles.”

We Plan To Take Part In ALL Special Committee Investigations

Buffalo Bills Give Fantastic Update On Damar Hamlin: “Damar Hamlin has been discharged from Buffalo General Medical Center to continue his rehabilitation at home”