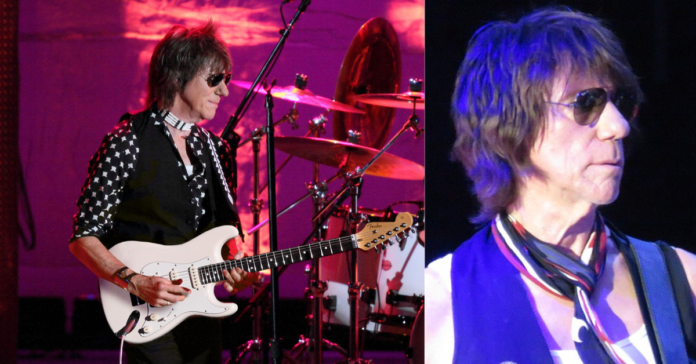 Jeff Beck, one of the greatest guitarists of all time who rose to fame in the English rock band The Yardbirds, passed away. He was 78. Weeks ago the rock star finished touring with Johnny Depp. He passed away ‘peacefully,’ his family said today.

A statement from his agent read: “On behalf of his family, it is with deep and profound sadness that we share the news of Jeff Beck’s passing. After suddenly contracting bacterial meningitis, he peacefully passed away yesterday.

“His family asks for privacy while they process this tremendous loss.” Beck won eight Grammy Awards and ranked fifth on Rolling Stone’s list of the 100 Greatest Guitarists.

He replaced fellow guitar legend Eric Clapton in 1965 in the Yardbirds.

On behalf of his family, it is with deep and profound sadness that we share the news of Jeff Beck’s passing. After suddenly contracting bacterial meningitis, he peacefully passed away yesterday. His family ask for privacy while they process this tremendous loss. pic.twitter.com/4dvt5aGzlv

Beck released an album with Depp in the summer of 2022. According to Forbes:

His latest studio album 18 sees the legendary guitarist working closely with actor and musician Johnny Depp, best known for a filmography responsible for three Oscar nominations as well as work with artists like Shane MacGowan, Iggy Pop, Oasis and supergroup the Hollywood Vampires (which pits him alongside Alice Cooper and Aerosmith guitarist Joe Perry).

Released this past July, 18 finds the duo crafting a pair of original compositions while putting their own spin upon eleven covers ranging anywhere from the sun-drenched pop of the Beach Boys to the post punk goth rock of Killing Joke.

The album acts as the centerpiece of their current tour, one which makes its way across the U.S. into mid-November (ahead of newly announced European dates for Depp with Hollywood Vampires in 2023).

Jeff Beck Dead at 78. My forever guitar hero has gone.
I can’t even begin to tell you all how much his music inspires me and millions of others.
Beck was the king. All of my love to his family and loved ones. #RIPJeffBeck https://t.co/GUCYkZc3XY